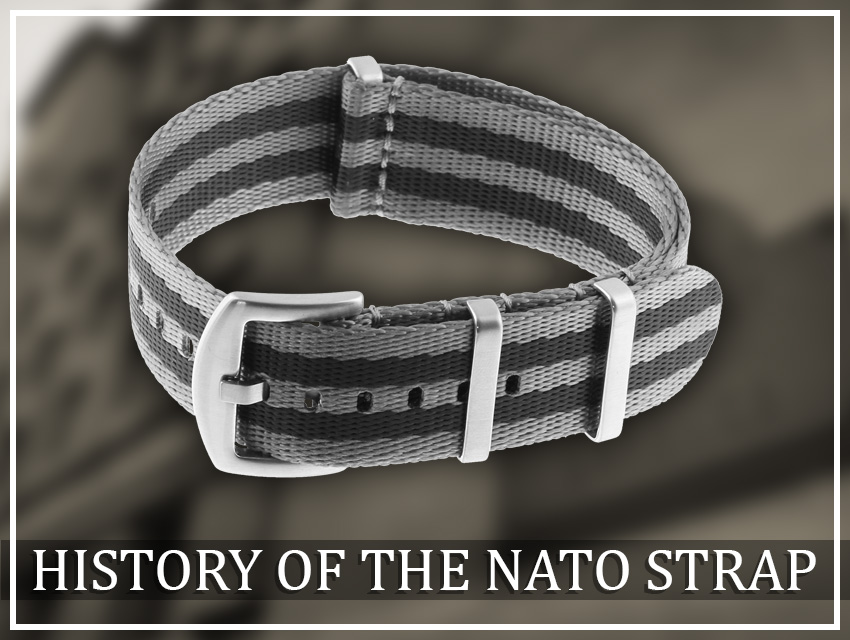 Camo print, cargo pants, combat boots — The military has long been a source for fashion trends, with top designers transforming what was once utilitarian, standard-issue gear into must-haves for the style-savvy. Take one look at the abundance of military-inspired timepieces available today, and it’s obvious that the watch world has wholeheartedly embraced this look and made it their own. From Air Force pilot watches to Navy diving watches, any serious watch enthusiast likely has at least one military type timepiece in their collection.

Look beyond just the case and face of a watch, however, and you’ll find that the military style has infiltrated the wristwatch’s most vital accessory — the strap. From the Zulu watch strap to camouflage prints to the Bund strap, the military’s influence is everywhere; but none is as ubiquitous as the NATO watch strap. The NATO strap has been a mainstay in watch trends since its inception, and here we take a look at its origins, progression, and contemporary interpretations.

In 1973, the British Ministry of Defense (MOD) added to their catalog of standard issue gear a new item named, “Strap, Wrist Watch”. These wristwatch straps were classified as being “Admiralty Grey” in color, 20mm in width, and they were equipped with chrome-plated brass buckles. The strap was constructed from two pieces of nylon fabric — a longer piece to wrap around the wrist, and another shorter piece that loops behind the watch case to prevent the case from moving up and down the strap. 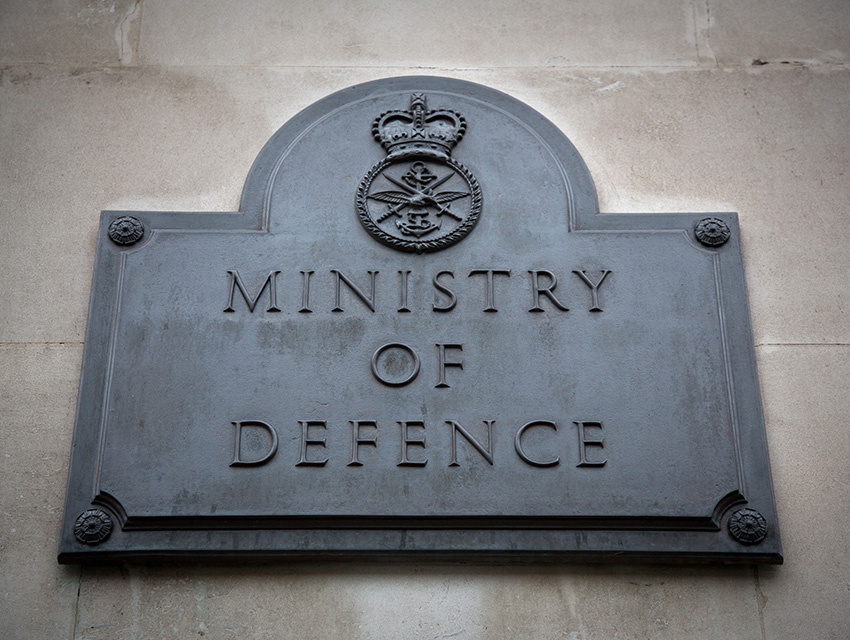 These MOD watch straps were eventually nicknamed G10 straps in reference to the G10 form that had to be filled out to order one. The NATO designation only came about much later and that was in reference to the 13-digit inventory “NATO Stock Number” (NSN) assigned to the strap. Since then, the G10 NATO strap has become a favorite among watch fans everywhere.

When Sean Connery starred in the 1964 James Bond flick ‘Goldfinger’, on his wrist was the Rolex Submariner 6538. This was the third time Bond fans had seen the super-spy wearing the famed Rolex Sub, yet there was something very different about it. Rather than being outfitted with a leather strap as it had been in the previous two Bond films, the Submariner 6538 was attached to a striped nylon strap. 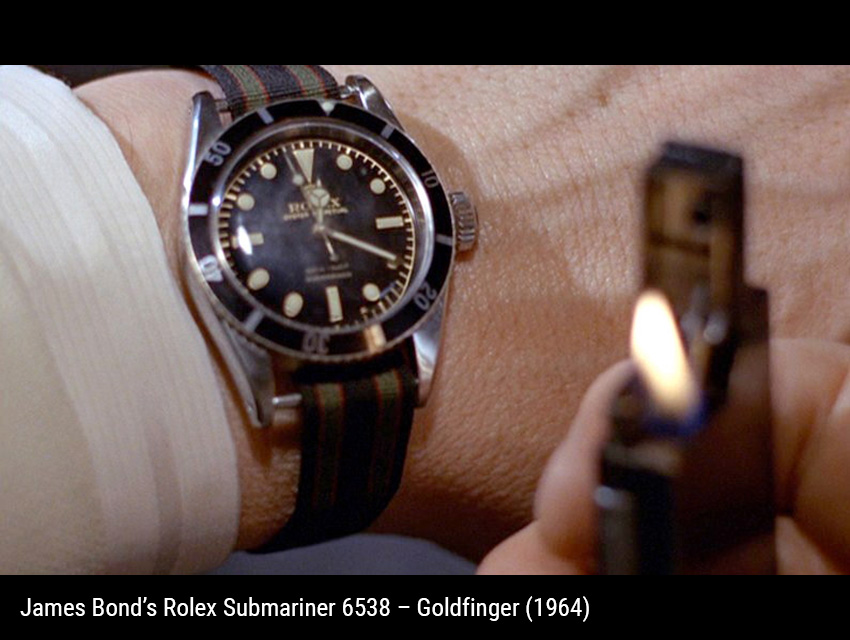 It was previously agreed that Bond’s NATO strap was black and grey, however when viewed on higher quality footage, the colors of the strap look navy blue, burgundy red, and olive green. Some argue this was the original color of the strap, while others point out that the colors only look that way because of video enhancement. The coloring of the strap is not the only point of contention on this seemingly innocent timepiece accessory — its name is debated as well.

Today, it’s safe to say that the ‘NATO’ label no longer just refers to the utilitarian military issued gear, but rather it encompasses a much wider variety of styles, colors, prints, sizes, and even materials.

Gone are the days of only “Admiralty Grey” color or two-tone gray and black stripes. NATO straps are now offered in every color imaginable, including solid colors, stripes, and even patterns like camouflage. Widths also vary to fit the different sizes of watches, from small to extra-large; common sizes range from 16mm to 24mm. Plus, NATO watch bands are no longer simply limited to being made of nylon — they can be crafted in all types of leather and even canvas.

So this begs the question; what exactly constitutes a NATO watch strap? It is the construction of the band rather than the material or colorway. To be considered a NATO band, there must be a shorter additional strap with a buckle that holds the watch case in place and prevents it from sliding up and down the longer strap, which is secured around the wrist.

But what about the NATO watch band’s close sibling, the Zulu watch strap?

At first glance, NATO straps and Zulu straps may appear to be very similar in design — almost identical even. Upon closer inspection however, you’ll see that there are some important distinctions.

As we mentioned, NATO watch straps were designed to include an additional shorter strap flap to loop behind the case for enhanced security around the wrist. Three-ring Zulu watch bands (sometimes also referred to as HD NATO straps) do not include this extra piece, but rather consist of just one long continuous strap. Furthermore, Zulu watch straps typically have thicker fabric and thicker buckles compared to NATO straps. 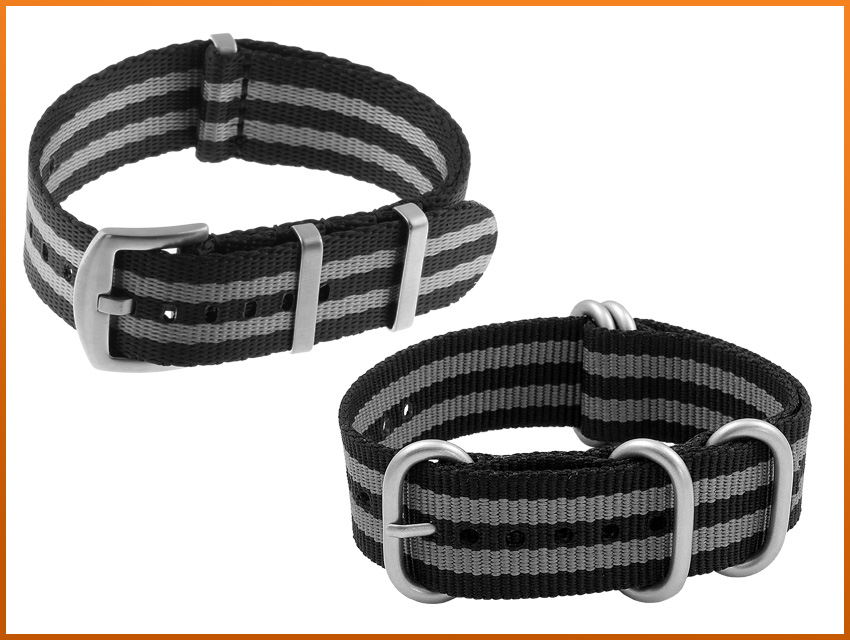 To make matter a little more confusing, five-ring Zulu bands do indeed have that extra strap just like the NATO strap—the difference then mainly lies in material thickness and heftier buckles.

As a result, the names NATO and Zulu are often used interchangeably, although they are indeed different watch strap styles.

The Appeal of the NATO Strap

Whether you call it NATO, G10, Zulu, or even James Bond, a major appeal of these military-inspired watch straps is that they pair with almost any wristwatch. From inexpensive watches to ultra luxurious timepieces to cutting edge smartwatches, the NATO strap effortlessly adds vintage charm to all types of timepieces attached to it. 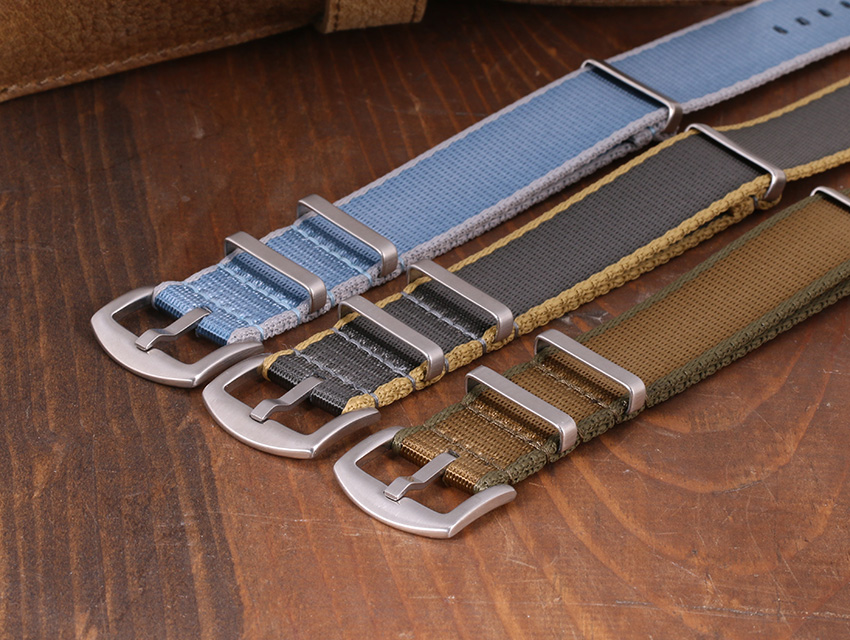 What’s more, swapping out straps and bands is an easy way to change up the overall look of a watch. Building a collection of NATO watch bands is considerably easier on the wallet than amassing a large collection of different watches. Plus, traveling with one watch and an assortment of straps is the savvier way to pack — something to think about as you plan your next getaway.