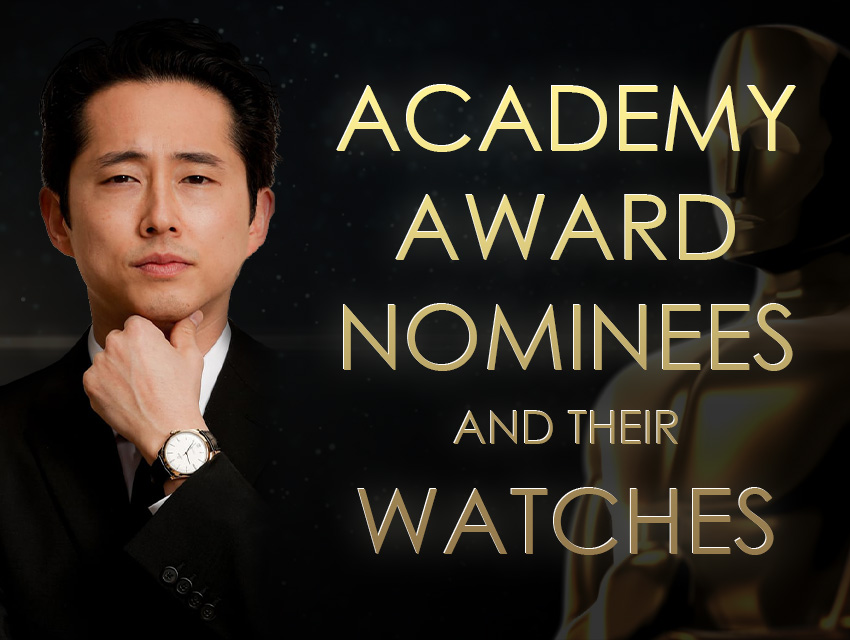 Slated to take place Sunday, April 25, the 2021 Oscars will not be a Zoom cast like so many other recent award shows but will take place at both Union Station in downtown Los Angeles and the Dolby Theatre in Hollywood. As we wait for the show, let’s have a closer look at a few Academy Award nominees and the watches they wear.

Riz Ahmed nabbed a nomination for “Best Actor in a Leading Role” in the film Sound of Metal for his portrayal of a metal drummer who loses his hearing. Aside from an already impressive acting résumé that includes roles in the movies Nightcrawler and Rogue One, in addition to the HBO miniseries The Night Of, the 2021 Oscar nominee also has a successful music career as Riz MC. 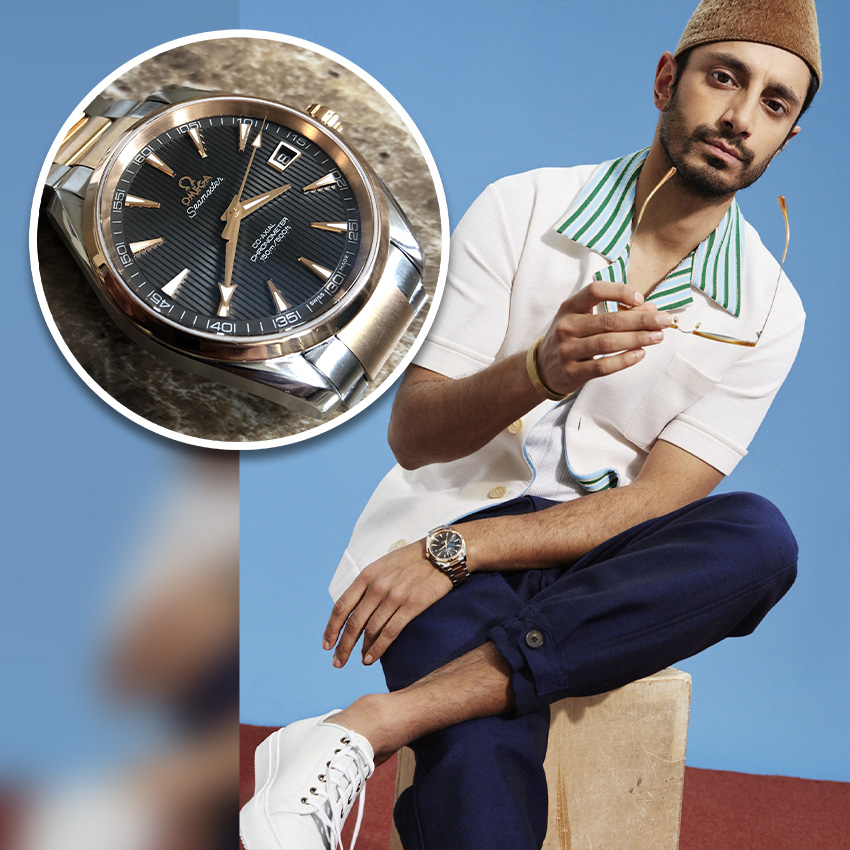 To complement his stylish laid-back style, Riz Ahmed opts for a few different watches. For instance, we’ve spotted him wearing a two-tone Omega Seamaster Aqua Terra with a matching steel and gold bracelet. On another occasion, Riz Ahmed paired a black suit with a black tee and an all-black Bell & Ross watch. However, rather than going with a ubiquitous square-shaped B&R, he wore a round Bell & Ross Vintage WW1 with a steel case, black dial with oversized hour markers, and a black leather strap attached to the wire lugs.

Steven Yeun first struck it big on the small screen playing Glenn Rhee in the super popular AMC television series The Walking Dead. In 2020, Steven Yeun not only served as executive producer of the film Minari but also took on the lead role. Minari tells the tale of a family of South Korean immigrants trying to make it in rural United States during the 1980s and the movie has earned six Oscar nominations. One of those is Steven Yeun’s nomination for “Best Actor in a Leading Role.” 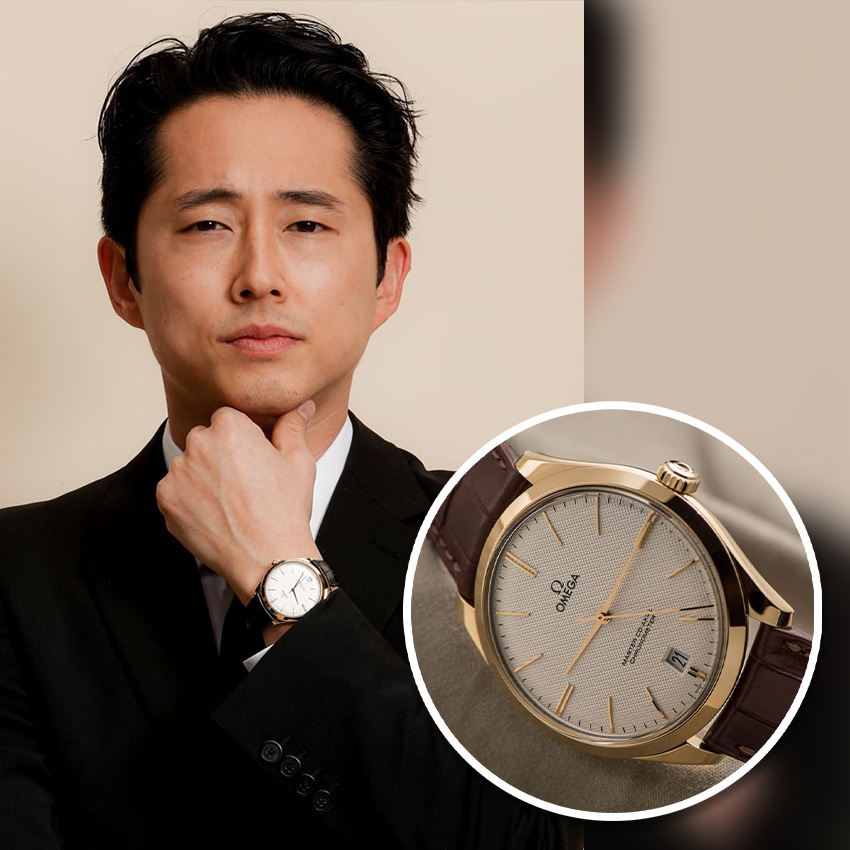 While we often saw Steven Yeun wearing a Timex field watch on a NATO strap in the past, these days he’s switched his watch out for something far dressier. Steven Yeun currently wears an exceedingly elegant Omega De Ville Trésor with a gold case, brown leather strap, and Master Co-Axial manual-winding movement.

With already one Oscar award to his name, this is the third time Gary Oldman is nominated in the “Best Actor in a Leading Role” category. Gary Oldman’s Academy Award nomination this year is for his title role in the film Mank, which is about Herman J. Mankiewicz’s development of the screenplay for Citizen Kane. 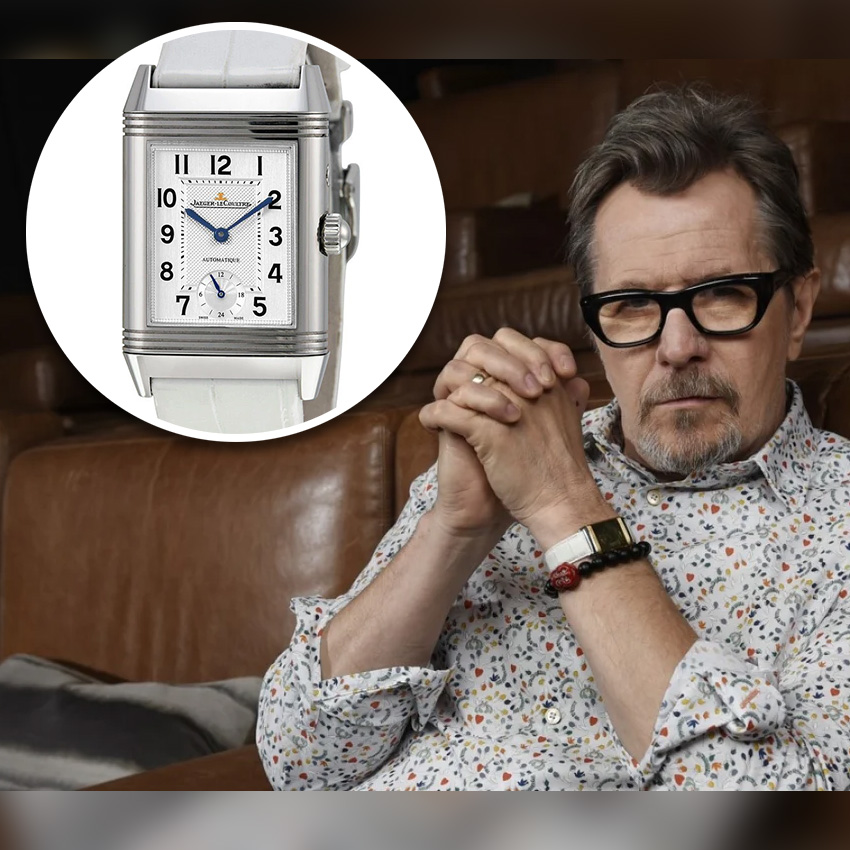 Gary Oldman’s taste in luxury watches is almost as diverse as the parts he’s played in the past. We’ve spotted Gary Oldman wearing a variety of different timepieces over the years, ranging from vintage Rolex watches to a sporty TAG Heuer Monaco to an elegant Jaeger-LeCoultre Reverso. One theme that seems to carry through Gary Oldman’s watches is a preference for leather straps.

It’s been a solid award season for actor Daniel Kaluuya so far as he’s racked up best supporting actor awards at BAFTA, Golden Globe, and Critics’ Choice for his portrayal of Chairman Fred Hampton in the movie Judas and the Black Messiah. And now the actor is a favorite to win the Oscar for “Best Actor in a Supporting Role” this coming Sunday. 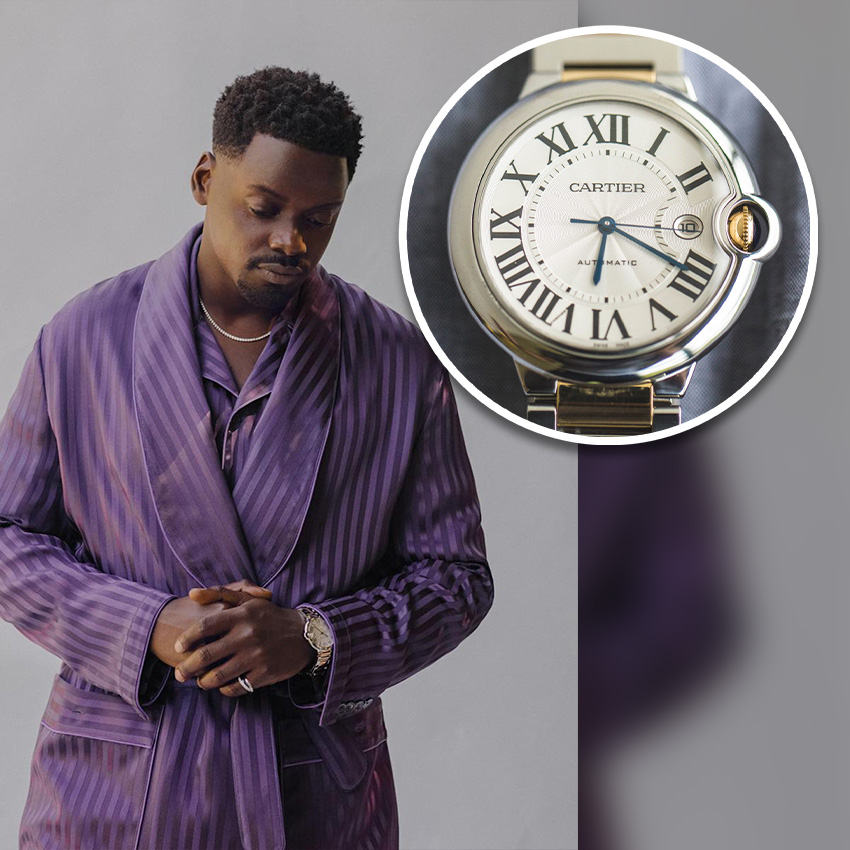 Daniel Kaluuya has been dressing up his wrist to match his award outfits this year, first wearing a full gold Omega Seamaster Aqua Terra complete with a matching gold bracelet to the Critics’ Choice Awards. Following that, we noticed Daniel Kaluuya sporting a two-tone steel and yellow gold Cartier Ballon Bleu to the Screen Actors Guild Awards, also on a metal bracelet. We can’t wait to see what watch he’ll choose to wear to the Oscars.

He may be most known for his comedic characters like Borat, but Sacha Baron Cohen can also be serious when the role calls for it. Sacha Baron Cohen has two 2021 Oscar nominations to prove it—one for best supporting actor for playing Abbie Hoffman in the drama The Trial of Chicago 7 and the other for “Best Adapted Screenplay” for the comedy Borat Subsequent Moviefilm. 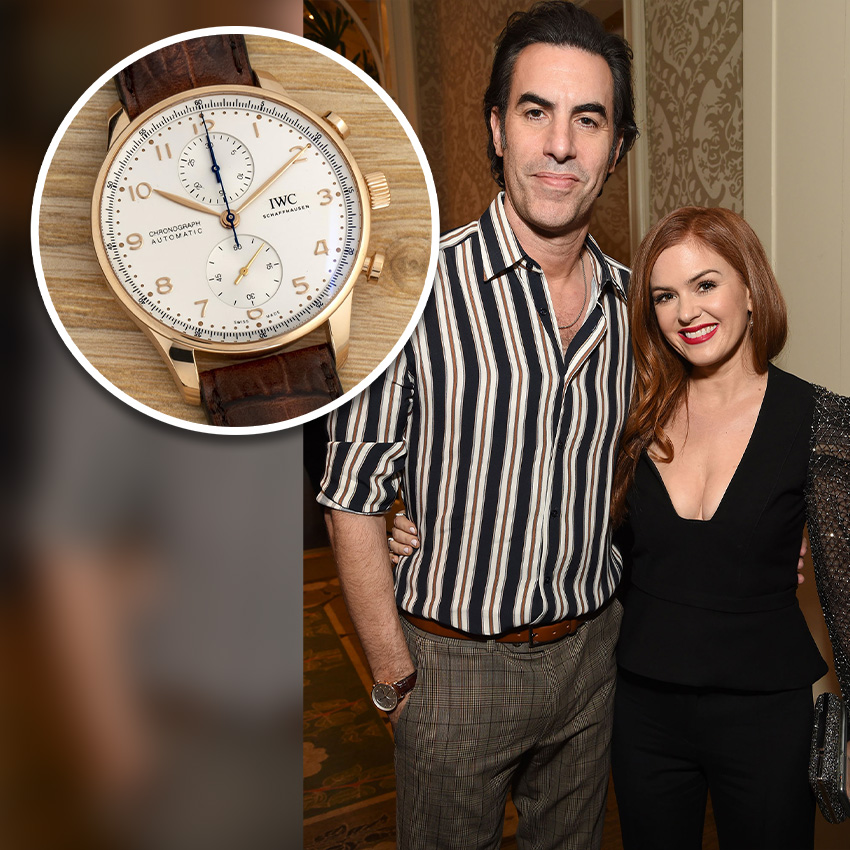 As this year’s Golden Globe Awards, Sacha Baron Cohen had on an Omega Speedmaster “Moonwatch” when he accepted his award for “Best Actor in a Musical or Comedy Film” via Zoom. Conversely, during last year’s pre-pandemic award season, Sacha Baron Cohen was often spotted wearing an IWC Portugieser Chrono on a leather strap while posing for pics on the red carpet.

Director David Fincher has been nominated three times for an Academy Award for the films The Curious Case of Benjamin Button (2008), The Social Network (2010), and this year’s contender, Mank (2020). While he’s picked up plenty of other awards for his film and television work, an Oscar has eluded him thus far—but maybe this year will prove to be different. 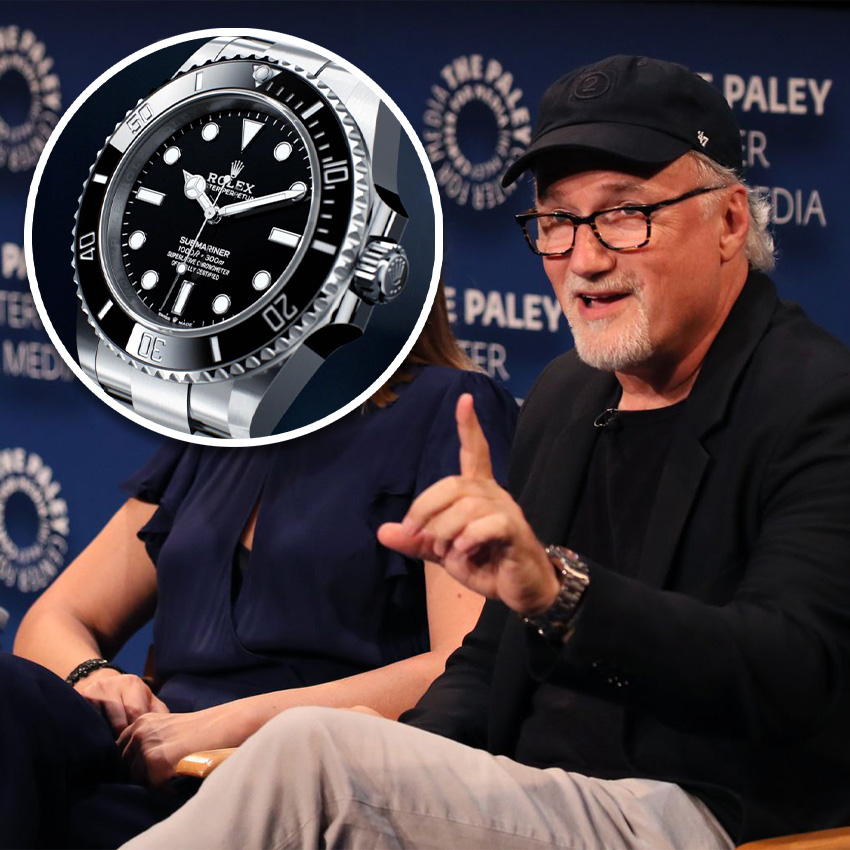 In terms of watches, David Fincher is a fan of Rolex with several models appearing on his wrist over the years. From an ultra-luxe platinum Day-Date II on a matching platinum President bracelet to a steel Submariner on an Oyster bracelet to a white gold Daytona on a black rubber Oysterflex bracelet, David Fincher clearly appreciates white metal Rolex watches. 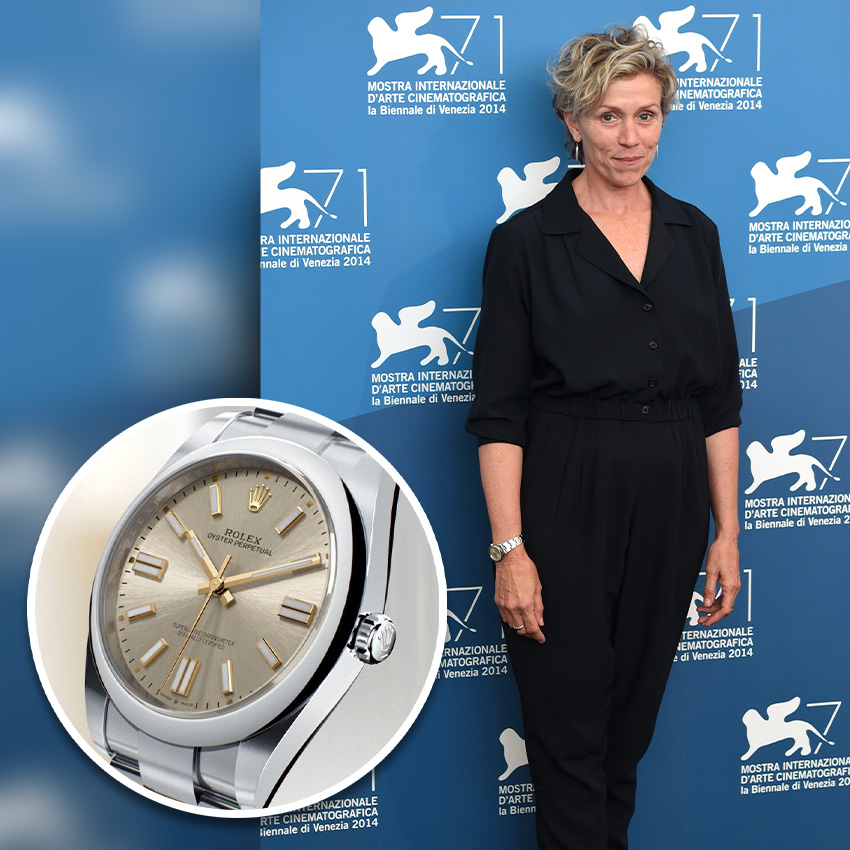 While Frances McDormand is known for enjoying breaking so-called fashion rules—particularly on the red carpet—the Oscar-winning actress does stick to a classic when it comes to her watch. Frances McDormand often wears straightforward steel Rolex Oyster Perpetual watch, paired with the classic Oyster bracelet.

We’ll be tuning in to the 93rd Academy Awards not only for all the movie accolades and speeches but also to see what watches this year’s top film people will choose to wear to the event. Who do you think the award for best watch should go to? Tell us your winner in the comments section below.