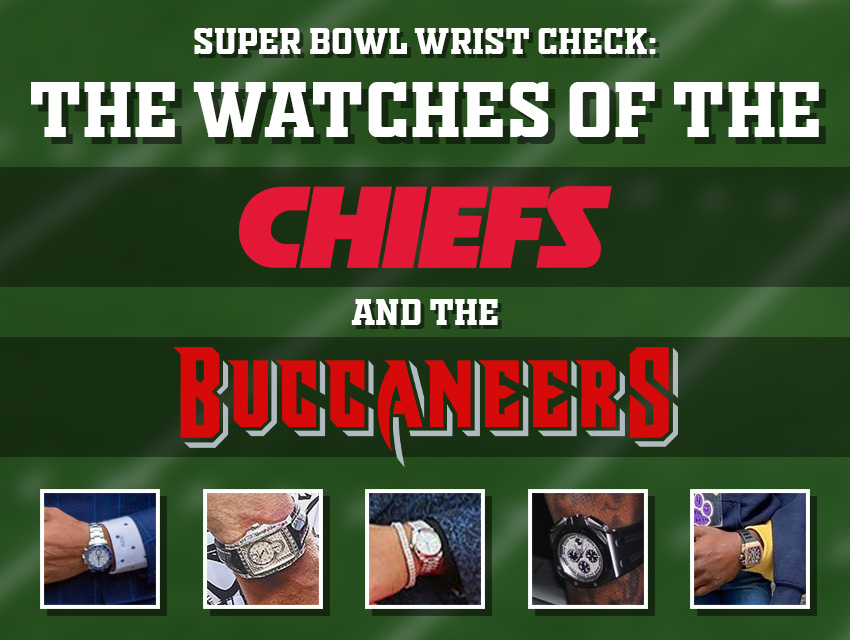 Slated to take place on February 7, 2021, in Tampa Bay, Florida, the 55th Super Bowl will see defending champions, Kansas City Chiefs, and home team, Tampa Bay Buccaneers, battle it out for the championship trophy. While we wait for football’s biggest game of the year, let’s have a closer look at what some NFL players from the Chiefs and the Buccaneers wear.

Quarterback for the Chiefs, Patrick Mahomes led his team to Super Bowl victory last year—the team’s first in 50 years. So he’s looking to defend his championship status and slip another Super Bowl Ring on his finger. In terms of watches, Mahomes is most definitely a Rolex man, with plenty notable models in his collection. We’ve spotted him wearing a stainless steel and blue ceramic Yacht-Master II, a two-tone Daytona, an Everose gold Yacht-Master with a diamond pavé dial and black rubber band, a steel GMT-Master II “Batman” and most recently, an Everose gold Daytona “Rainbow” Rolex with multi-colored sapphires on the bezel. 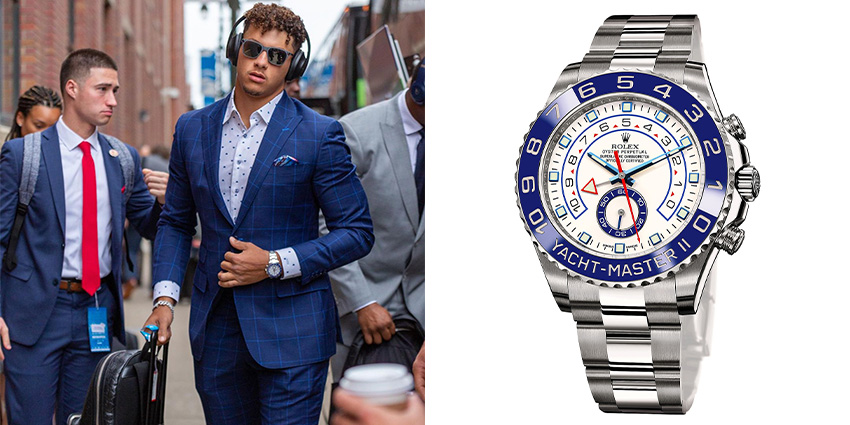 Along with his Rolex watches, Mahomes has also been seen wearing the crowd-pleasing Apple Watch. But we’ll bet that the NFL superstar will probably treat himself to another Rolex if he wins Super Bowl LV. 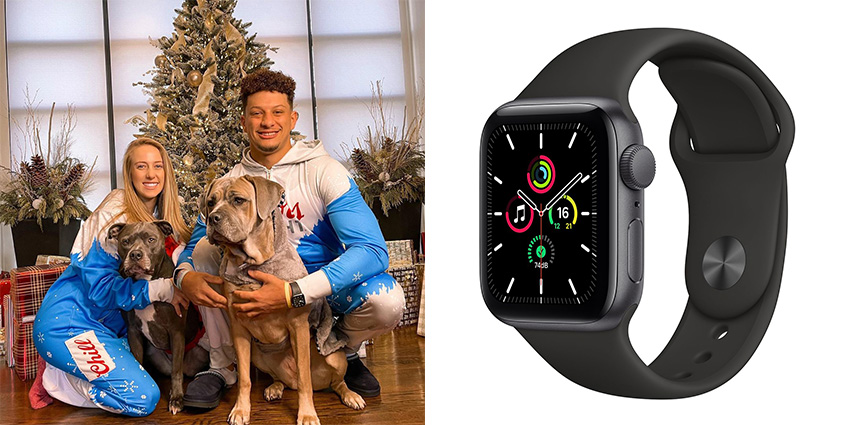 Travis Kelce, tight end for the Chiefs—and many would argue, the best tight end in the NFL right now—also loves a Rolex watch. He’s got a few in rotation including a casual steel Datejust with a white gold fluted bezel and steel Oyster bracelet, a dressy yellow gold Day-Date President with a diamond-set bezel, and an ultra-prestigious platinum Day-Date President, complete with the ice blue dial. Given Kelce’s penchant for fashion-forward outfits, it’s no surprise he’d want a different Rolex to wear depending on his look of the day. 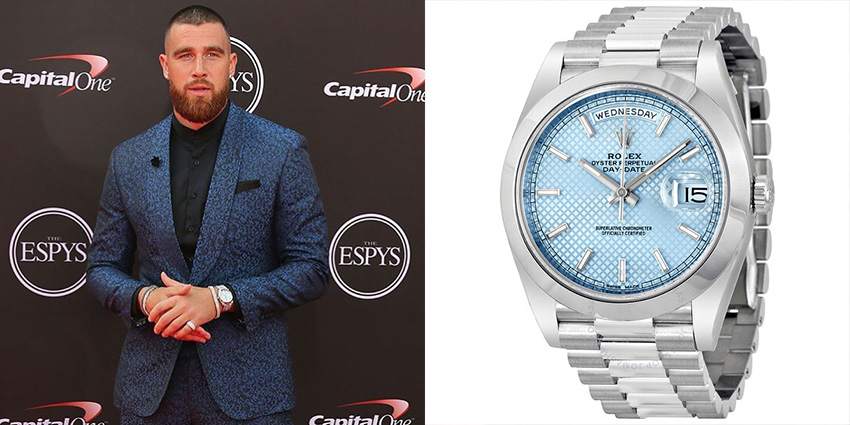 In addition to Kelce’s Rolex watches, he’s also frequently seen wearing a large rectangular diamond watch on his wrist paired with a black leather strap with white stitching. This head-turner of a timepiece is none other than the Breitling for Bentley Flying B Jumping Hours watch—not something we see out in the wild often. 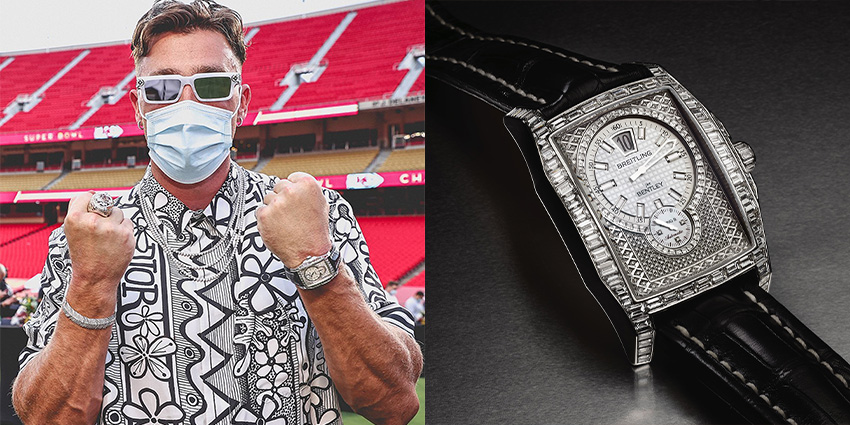 A safety for the Chiefs, Tyrann Mathieu picked up the nickname “Honey Badger” in college for his keen ability to force turnovers, but now he prefers to go by “The Landlord” after he was tapped as leader of the team’s defense line. Mathieu may have two nicknames but we’ve only spotted one watch on his wrist—but with a watch like that, you certainly don’t need more.

Mathieu’s watch is a Richard Mille, which thanks to a blend of high-tech materials and cutting-edge tech is recognized as one of the most expensive watch brands today. His version sports a diamond-set rose gold case paired with a white rubber strap. 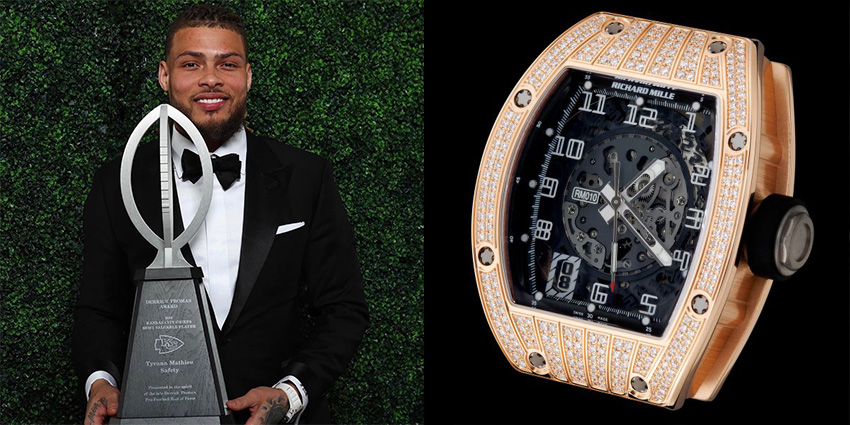 Once the heart of the New England Patriots, quarterback Tom Brady made the move to Tampa Bay Buccaneers this season. And now, the Bucs are finally heading back to the Super Bowl for the first (and only) time since their victory in 2002. Brady is no stranger to the Super Bowl, en route to his 10th one with already six wins to his name. And what watches does the G.O.A.T. QB wear when he’s not on the field?

These days it’ll likely be an IWC watch, like a Big Pilot, Spitfire, Top Gun, Portugieser, or Ingenieur, since Brady signed on to be an official brand ambassador in 2019 (after leaving TAG Heuer). It’s a fitting partnership since it’s been reported that the first nice watch he bought himself was an IWC back when he was 24 years old. 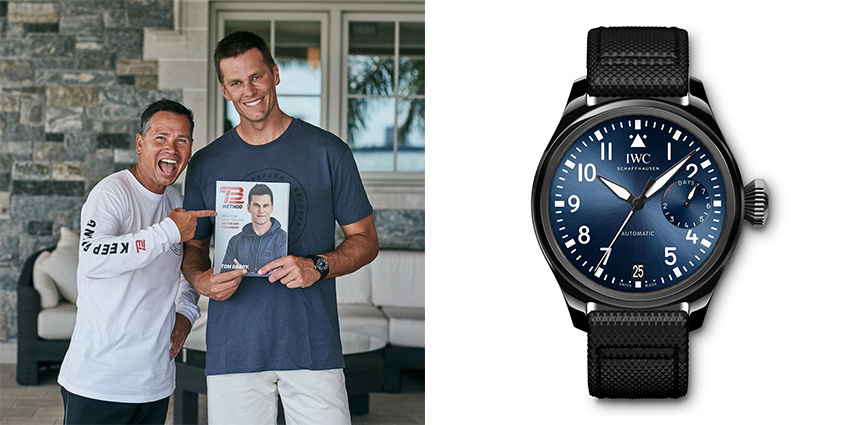 Brand agreements aside, Brady has also been seen with different Rolex watches on his wrist including a yellow gold Day-Date President, a steel Submariner, and a Milgauss with the unique green sapphire crystal. 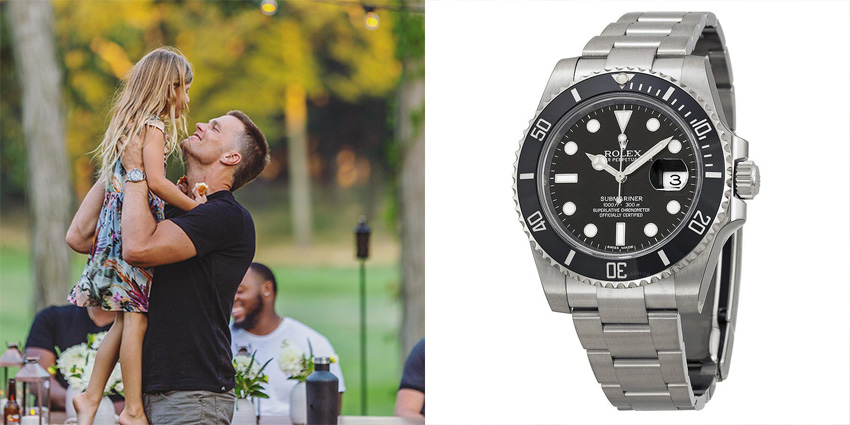 This is the first season Leonard Fournette plays for the Buccaneers—and with the Super Bowl just ahead, it’s safe to say it’s been a memorable season for the running back so far. Fournette has long appreciated a fine watch. During his rookie season playing for the Jacksonville Jaguars, Fournette bought everyone on the team’s offensive line Rolex watches as a way of saying thank you. He also wore a yellow gold Rolex Day-Date watch when he signed his Buccaneers’ contract.

Along with his love of Rolex watches, Fournette is also a Richard Mille enthusiast, with at least four in his collection, as seen by a picture he shared on social media. 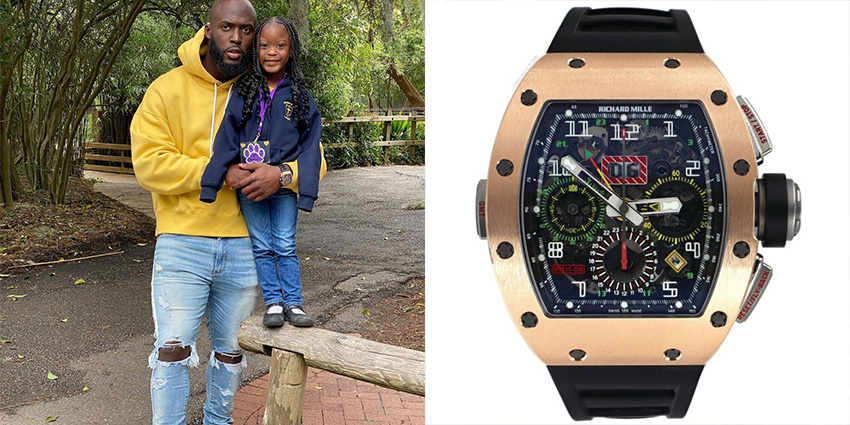 Jason Pierre-Paul has been an outside linebacker for the Buccaneers since 2018. After a roller coaster NFL journey thus far, including losing a finger on his right hand due to a fireworks accident and a fractured neck from a car accident, JPP is heading back to the Super Bowl after nine years. He won Super Bowl XLVI in 2012 with his former team, the New York Giants.

Pierre-Paul clearly enjoys wearing fine watches. From a steel Patek Philippe Nautilus with a white dial and an Audemars Piguet Royal Oak Offshore with a black rubber strap to a rose gold Richard Mille RM 011 and yellow gold Rolex Day-Date President—and plenty more in between—JPP has quite an impressive collection of top-notch timepieces. 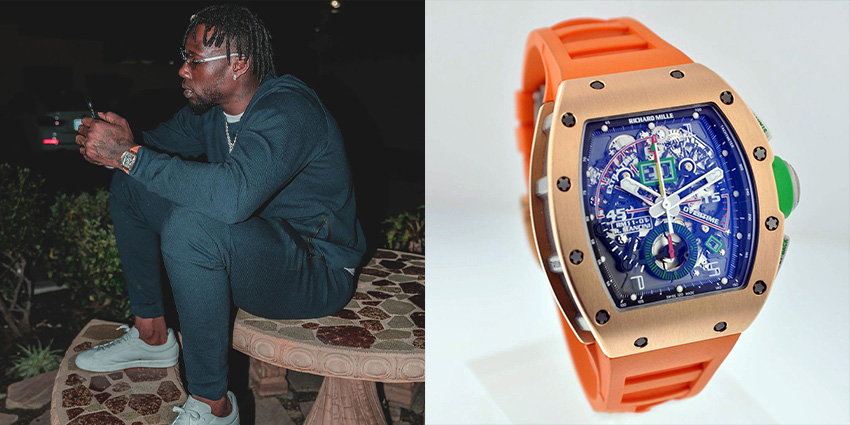 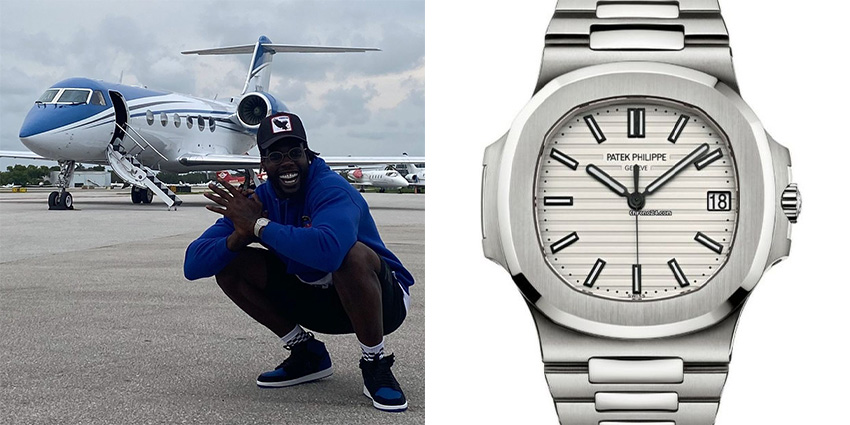 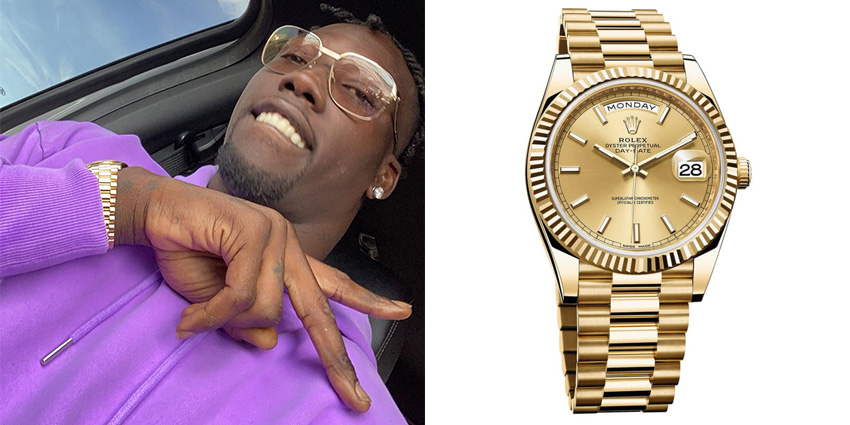 It seems that Rolex and Richard Mille are favorites among the players of these two football teams—and it’s not a stretch to say the NFL at large. As some of the highest-paid athletes in American sports, it’s not a surprise that these top-tier sportsmen would gravitate towards two ultra-luxurious and statement-making watch brands. Which of these pro footballers’ watches would you love to own? Who do you think will win Super Bowl 2021 this year? Make your predictions in the comments section below.