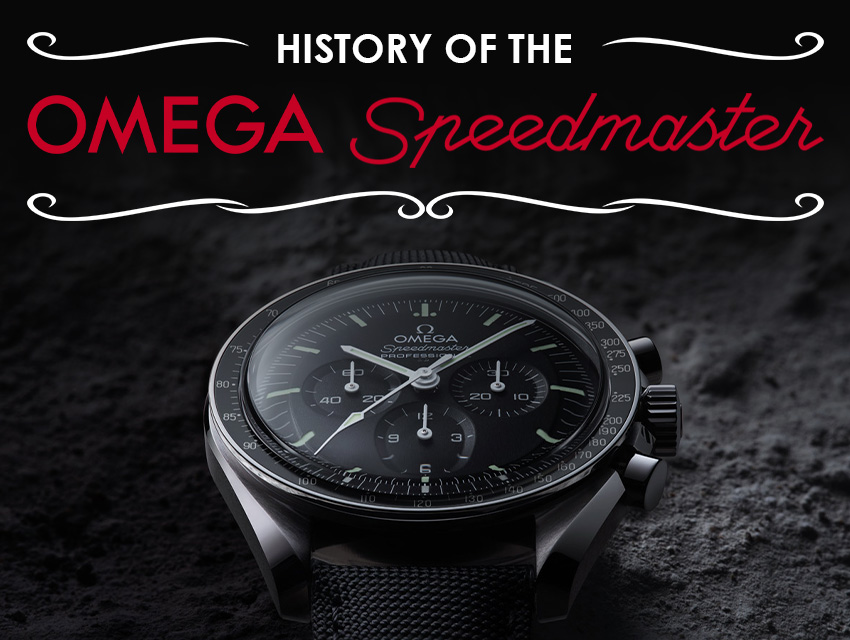 Affectionately called the ‘Speedy’ by enthusiasts, the Omega Speedmaster is one of the world’s most famous chronograph watches. Born in the late-1950s as a watch for motorsports, the Speedmaster gained prominence across the globe as part of the 1969 Apollo 11 spaceflight that first landed humans on the Moon.

The Origins of the Omega Speedmaster

Omega introduced the Speedmaster in 1957 as part of a trio of professional watches. The other two models were the Seamaster 300 diving watch and the Railmaster antimagnetic watch. 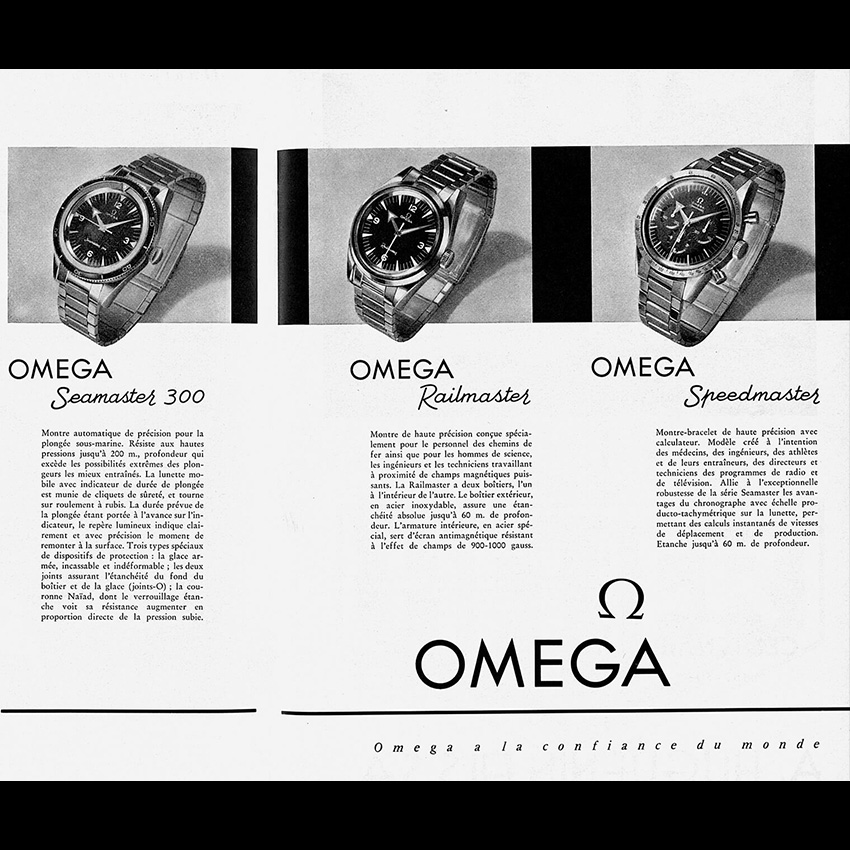 The first Speedmaster model was the reference CK2915, which featured a 38mm stainless steel case with two chronograph pushers flanking the winding crown, a black dial punctuated with three subsidiary dials and broad arrow hands, and a manual-winding movement inside. That movement was the now-legendary Caliber 321, which is a Lemania-based column-wheel and horizontal clutch chronograph movement that many will agree is one of the most elegant movements ever made. In 2017, Omega released a 60th Anniversary Speedmaster model, which was essentially a faithful reproduction of the original Speedmaster CK2915. 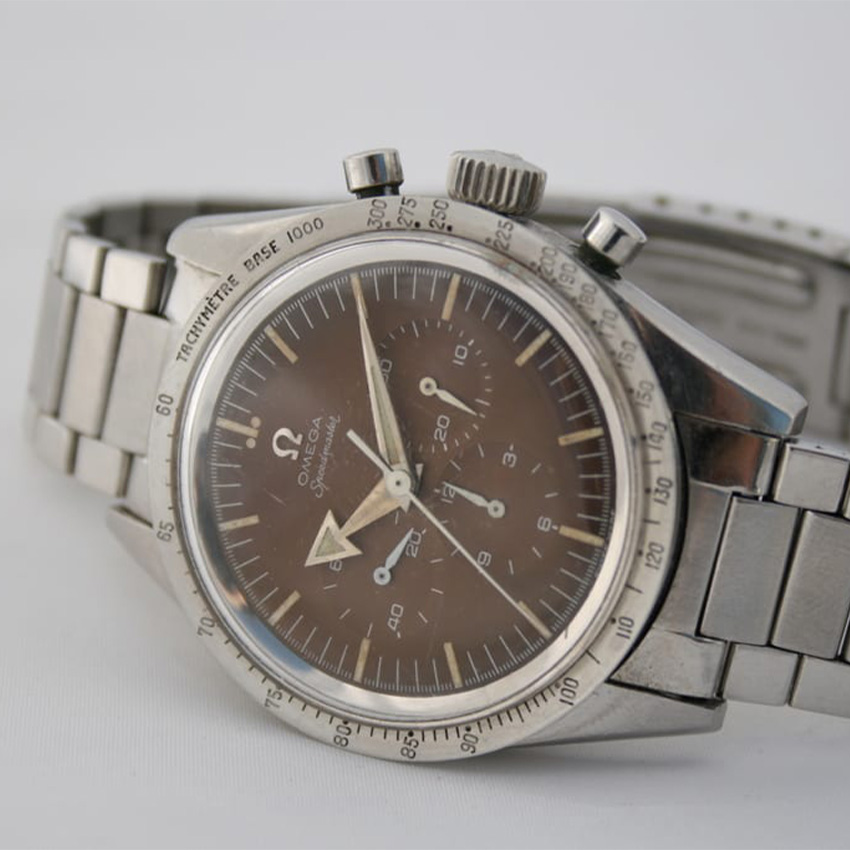 The next Speedmaster followed in 1959 in the form of reference CK2998. This model became particularly notable as the first Omega in space when astronaut Wally Schirra wore his personal Speedmaster CK2998 aboard the Mercury-Atlas 8 mission in 1962. Since then, Omega has issued commemorative “First Omega in Space” (a.k.a. FOIS) models in honor of the original reference CK2998.

Omega continued to update the Speedmaster over the following years with some changes in design to eventually become the Speedmaster we love and recognize today. For instance, a black bezel replaced the engraved steel one, stick hands became the standard, and the case not only grew to 42mm but also came equipped with crown guards. The word “Professional” was also added to the Speedmaster dial and current versions of the Omega Speedmaster Professional watches retain the fundamentals of the models created in the mid-20th Century.

Omega also replaced Caliber 321 in 1969 with the simpler and less costly to produce cam-controlled Caliber 861. Caliber 861 was also a Lemania-based manual winding chronograph movement and Omega continued to update this caliber over succeeding generations of the Speedmaster. However, in recent years, Omega revived the renowned Caliber 321 after spending years painstakingly recreating it. There are now a few special Speedmaster watches in the current catalog that run on the Caliber 321 re-issue.

According to Omega, the brand was one of four watchmakers invited to submit chronographs to be certified by NASA—and only the Speedmaster survived the grueling tests. In March 1965, the Omega Speedmaster Professional became “flight-qualified by NASA for all manned space missions and Extravehicular Activity (EVA).”

The Speedmaster has been present on all six manned missions to the Moon, starting with Apollo 11 when Neil Armstrong became the first man to walk on the Moon. Armstrong and fellow crewmembers, Buzz Aldrin and Michael Collins, were all issued Speedmaster Professional watches as part of their official gear. After that historic event in 1969, the Speedmaster became known as the “Moonwatch” and the models worn by the three Apollo 11 astronauts continue to serve as inspiration for modern versions of Omega Speedmaster Professional Moonwatch watches. 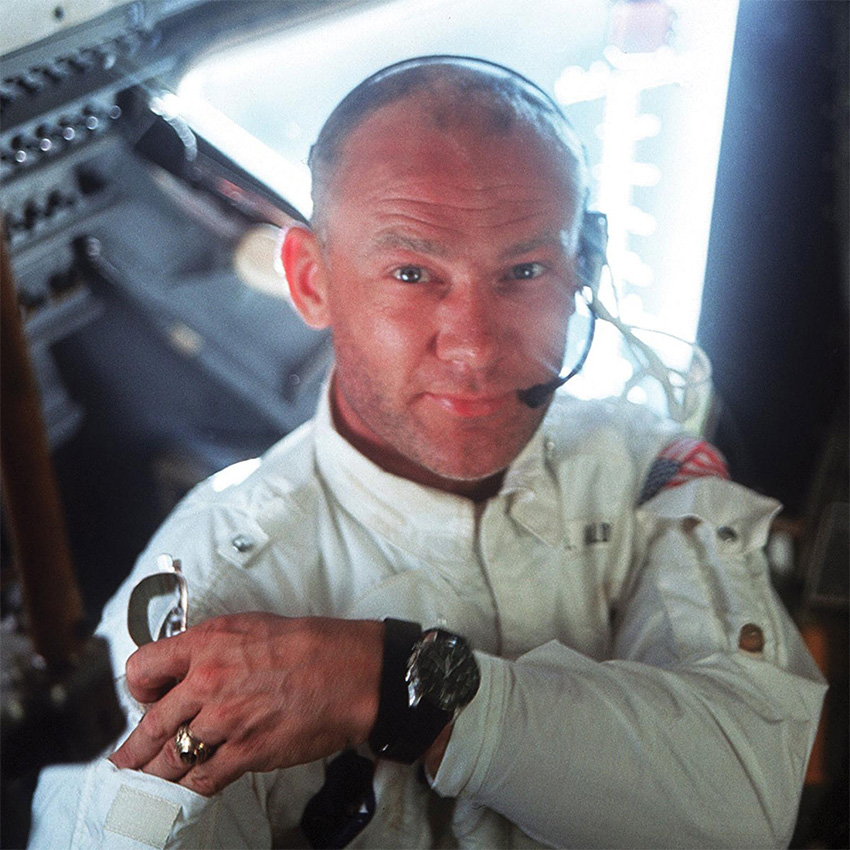 The Omega Speedmaster also played a significant role in getting astronauts James Lovell, John Swigert, and Fred Haise safely home during the ill-fated Apollo 13 mission in 1970. After an oxygen tank exploded on board and Swigert notified Mission Control with the now-infamous words, “Houston, we’ve had a problem,” the crew had to rely on their Speedmaster chronographs to time the critical burn required for safe re-entry into the Earth’s atmosphere. Because of the Speedmaster’s crucial role in the crew’s safe return, NASA awarded Omega the Silver Snoopy Award. As a result, Omega has issued several commemorative Speedmaster Snoopy watches as a proud nod to this honor.

More than five decades after its 1965 qualification, the original Omega Speedmaster Professional remains the only watch certified by NASA for Extravehicular Activity (EVA).

Omega has released a wide variety of commemorative Speedmaster models that pay tribute to its links to space exploration. From various Apollo mission anniversary models to different iterations of watches that journeyed to the Moon, there’s no shortage of space-inspired Speedmaster watches.

The Many Faces of the Speedmaster

While much of the Speedmaster conversation is dominated by the celebrated Speedmaster Professional Moonwatch series and other space-inspired editions, there are indeed plenty of other variations of the famed chronograph to note.

For instance, there’s the vintage-inspired Speedmaster ’57 lineup, characterized by watches with tachymeter-engraved metal bezels like the first model. Furthermore, the Speedmaster Racing collection channels the chronograph’s original motorsport spirit, complete with a checkered flag motif on the dial. 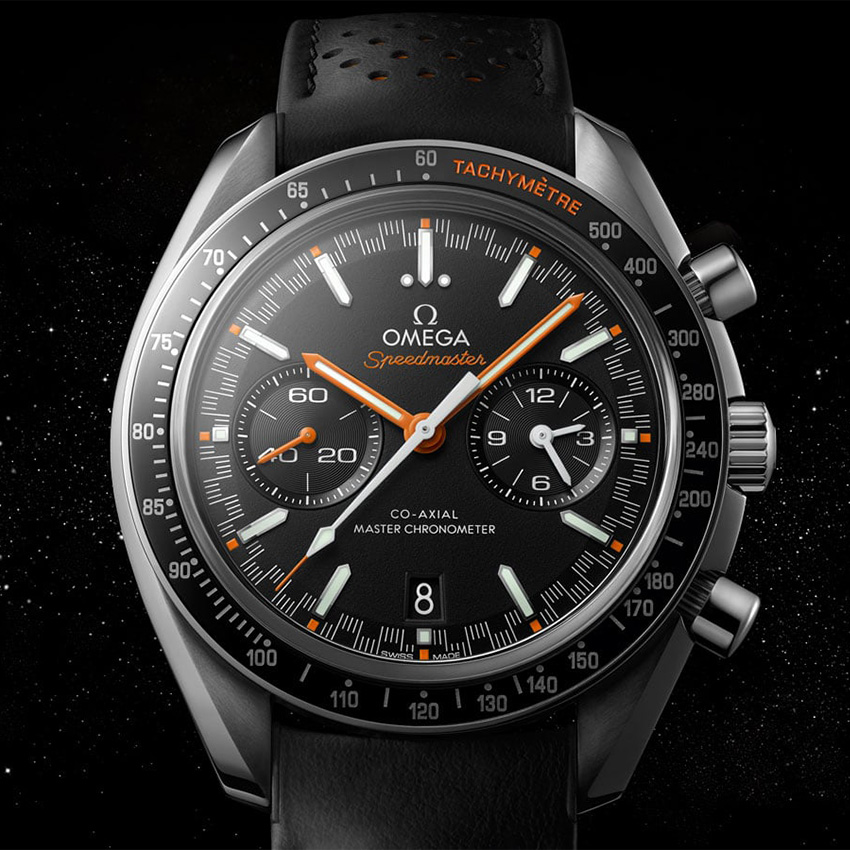 The Speedmaster Dark Side of the Moon watches have ultra-modern ceramic cases, offered in a variety of colors including black, gray, white, and blue. For fans of the moon phase display, Omega makes the Speedmaster Moonphase, which fits nicely into its lunar-adventuring history. There are also the Speedmaster 38 models for women, which along with smaller 38mm cases also include oval-shaped subdials instead of round ones. 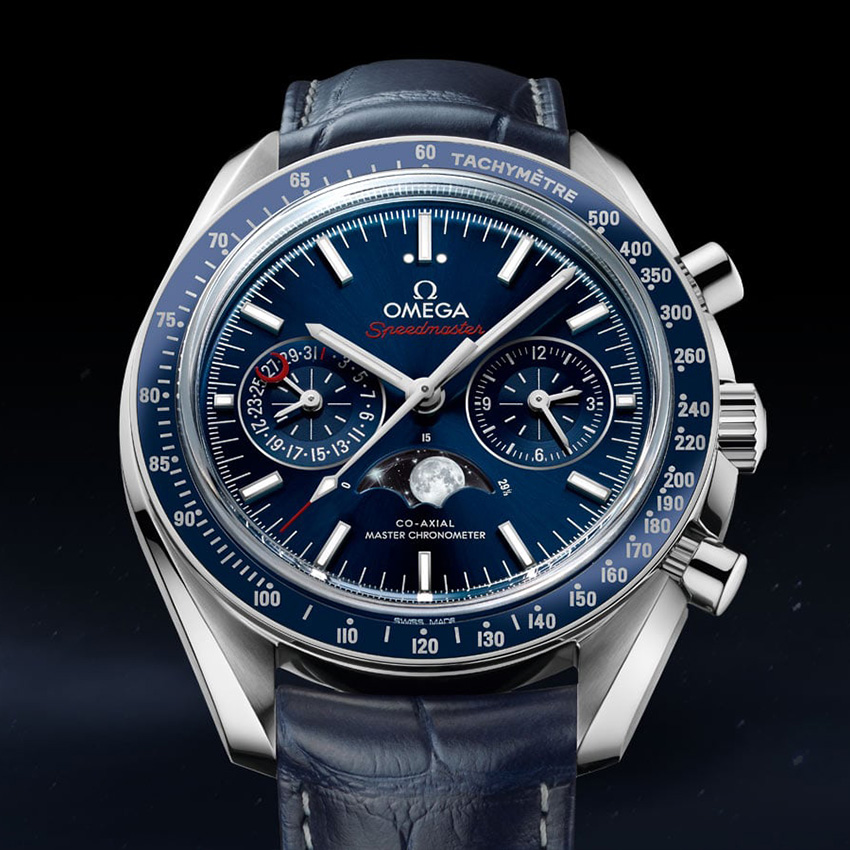 Whether automatic, quartz, or manual, with two registers or three, in steel or precious metals, the choice of Speedmaster watches is expansive. Regardless of the specific variation, the Speedmaster has made its mark as one of the most important and recognizable watch models created in the last six decades. The watch even boasts the #SpeedyTuesday hashtag on Instagram where fans share pictures of their beloved Omega chronograph once a week!

What do you think of the Omega Speedmaster? Do you have one or would like to own one in the future? Share your comments with us below.