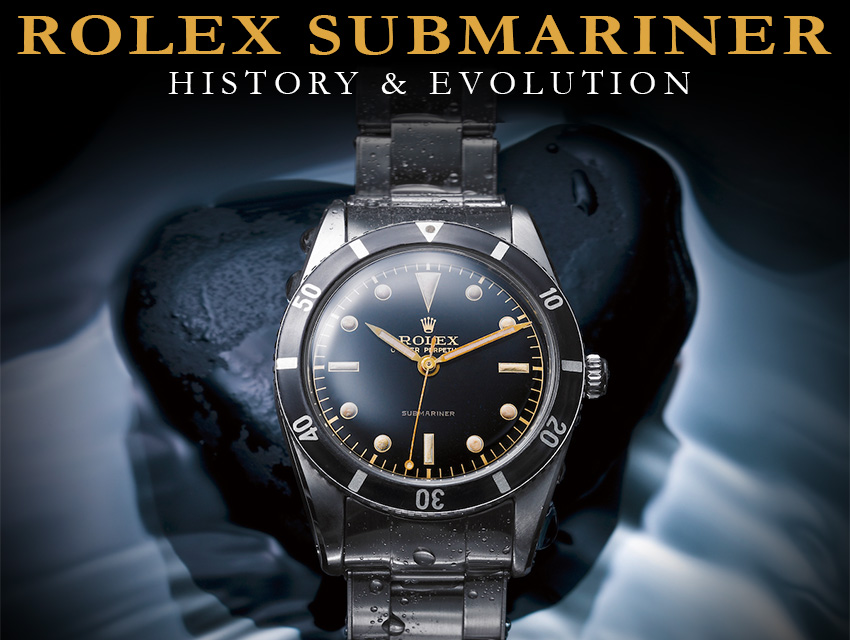 The Rolex Submariner is arguably the world’s most famous dive watch, often copied but never duplicated. Naturally, Rolex has updated and evolved the watch throughout the Submariner’s seven-decade history. However, despite all the improvements, the brand has ensured that the Submariner has retained its iconic design language. As a result, Submariner watches, whether from the 1960s, 1980s, or 2020s, are always instantly recognizable as Rolex’s flagship diving watch.

Keep on reading to learn about the history of the Rolex Submariner, complete with details on design evolution, variants, and references.

The Early Submariners – No Crown Guards 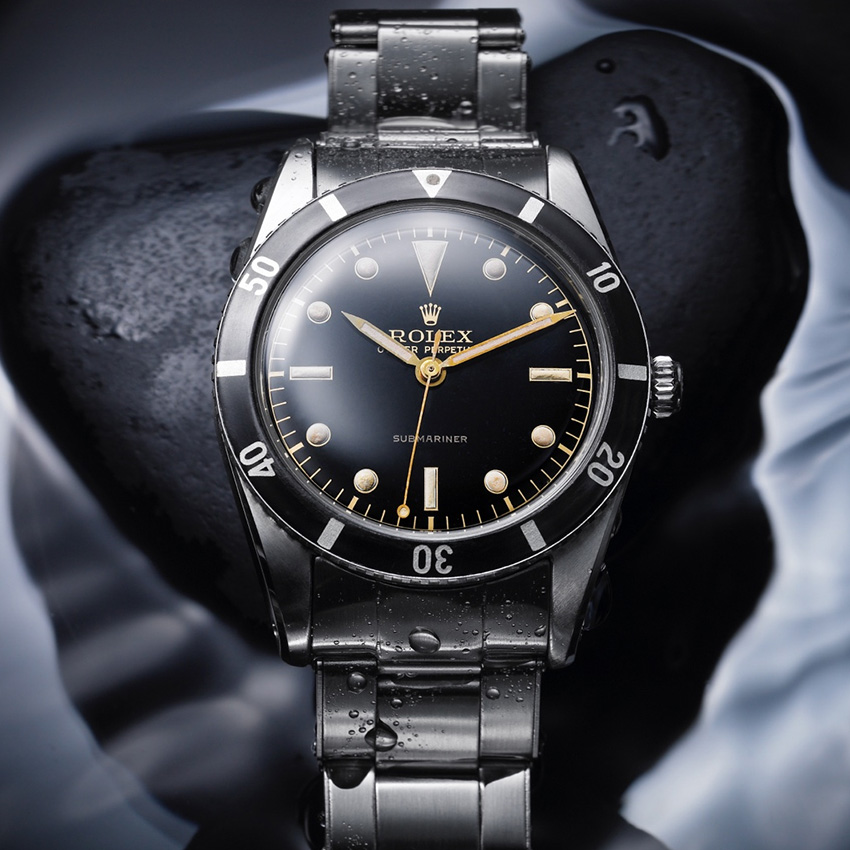 The earliest Submariner references, produced in the 1950s, featured 37mm steel cases, no crown guards around the winding crown, and radium-based luminescence. Rolex manufactured eight references during this period, ranging in water depth ratings (100m to 200m), crown sizes (big crown vs. small crown), and dial styles (pencil hands, Mercedes hands, and Explorer-style dials). It was clear that Rolex was experimenting with the details to get the formula just right.

The eight early Submariner references include:


The most famous of these vintage Submariners is the Submariner 6538 “James Bond” as it was the one that appeared on Sean Connery’s wrist in several James Bond films.

By the late-1950s, it was evident that crown guards would be a necessary addition to the Submariner. These protective shoulders would help to prevent damage to the winding crown if a diver accidentally knocked the watch. Therefore, in 1959, Rolex introduced reference 5512, which was not only the first Submariner to include crown guards but also the first to include a larger 40mm case. 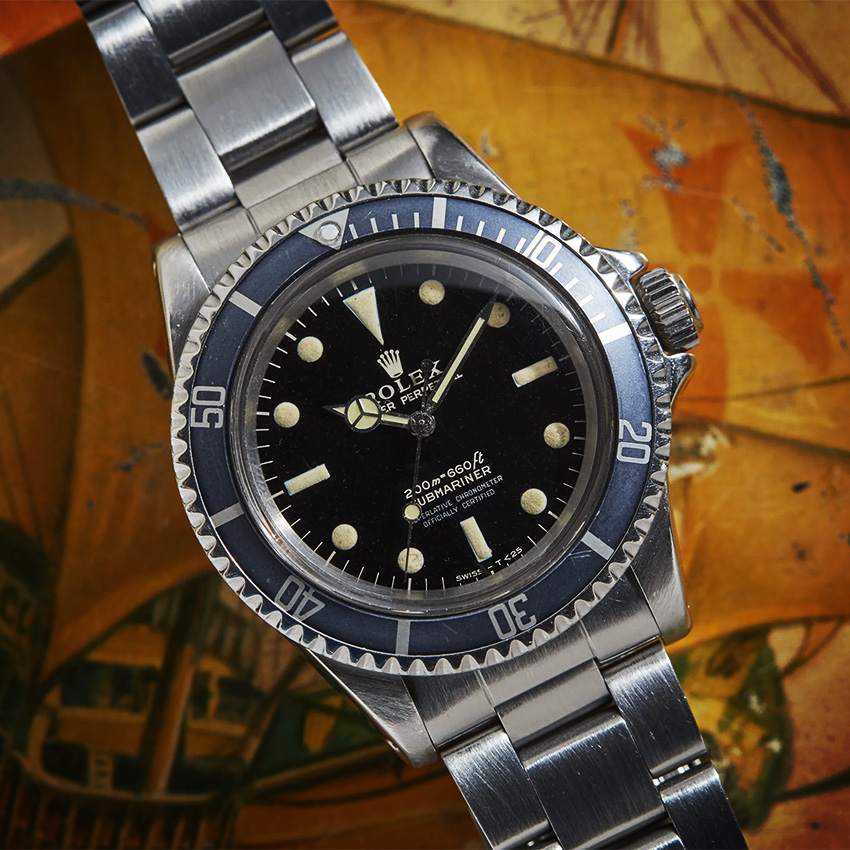 A few years later, Rolex launched the Submariner 5513, which looked similar to the 5512 but it ran on a non-chronometer movement. So the main difference between a Submariner 5512 and a 5513 is that the first is a chronometer while the latter isn’t.

Rolex produced Submariner 5512 from 1959 to 1978 and Submariner 5513 from 1962 to 1989. Depending on the year of production, these watches can either have radium or tritium lume, in addition to glossy dials with gilt writing or matte dials with white text. These Submariners were all offered in stainless steel with black dials and bezels.

Up until the mid-1960s, Rolex had only offered the Submariner with time-only dials. That all changed in 1967 with the introduction of the Submariner Date ref. 1680, complete with a Cyclops magnification lens above the date window at 3 o’clock. The launch of the first Submariner Date also paved the way for more variety within Rolex’s diving watch collection; the first yellow gold Submariner (ref. 1680/8) joined the lineup in 1969, which offered a choice of black and blue bezels and dials. 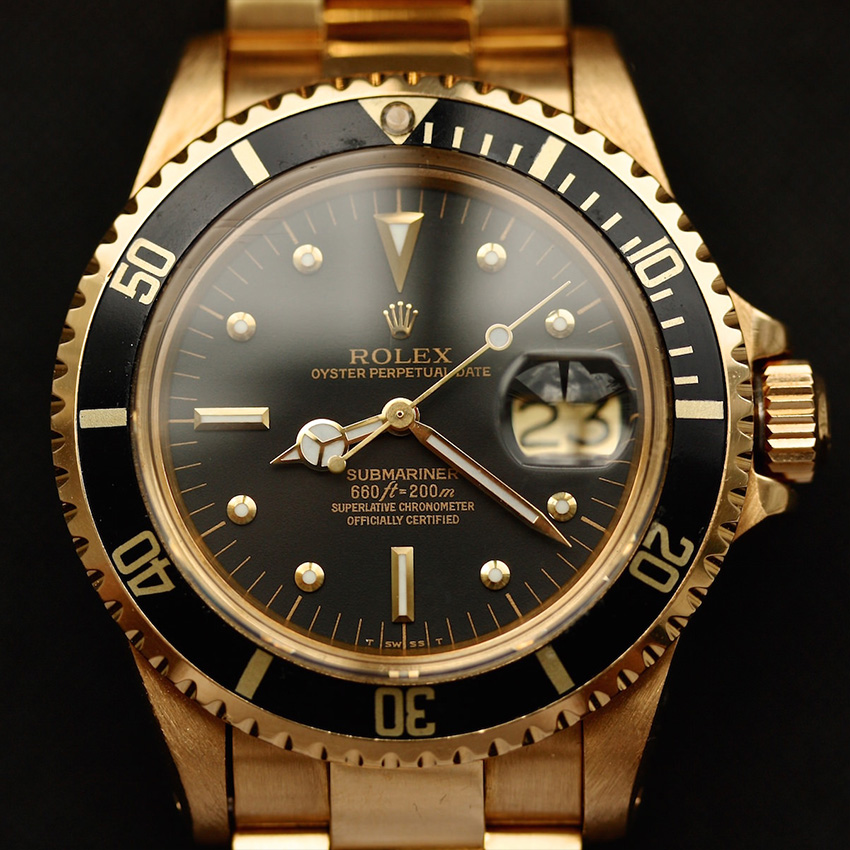 After about a decade of the first-gen Submariner Date watches, Rolex replaced them with a fresh batch of Submariner Date models in 1979, fitted with then-new Caliber 3035 movements and increased 300m water-depth ratings (from 200m). There was the steel ref. 16800 and the yellow gold ref. 16808. Then, in 1983, the first two-tone Submariner joined in the form of the ref. 16803.

Towards the end of the 1980s, unveiled the short-lived Submariner 168000, which was the first to feature 904L steel rather than the industry-standard 316L steel.

By 1988, Rolex discontinued the 1680x series to make way for new Submariner models.

Rolex launched the Submariner 1661x series in 1988, furnished with Caliber 3135 automatic movements. The line consisted of the steel ref. 16610, the two-tone ref. 16613, and the full gold ref. 16618. As always, the steel version featured black bezels while the gold and two-tone versions offered the choice of blue or black bezels. 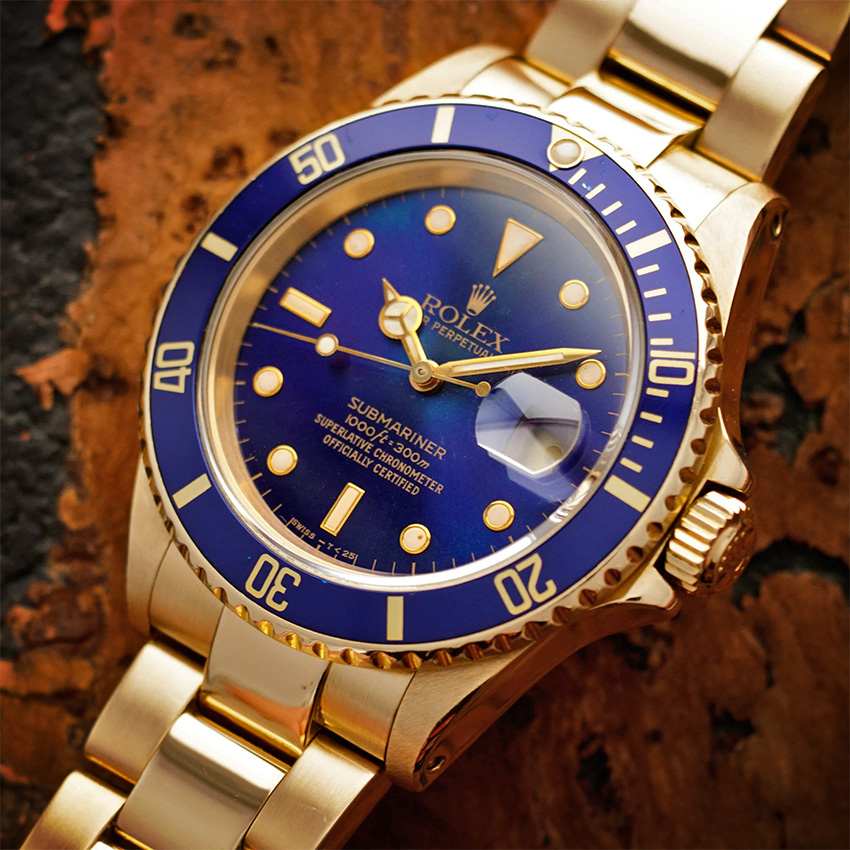 However, in 2003 Rolex released the first green bezel Submariner to celebrate the 50th anniversary of the famed dive watch. This Submariner ref. 16610LV eventually picked up the “Kermit” nickname thanks to its distinct color. Rolex produced the Submariner Date 1661x series until the mid-2000s.

The updated no-date Submariner arrived in 1990 with the Submariner ref. 14060. Compared to its predecessor (ref. 5513), the 14060 had a new movement (non-COSC Caliber 3030), improved water resistance (300 meters instead of 200m), and a sapphire crystal (instead of acrylic.) As is always the case with no-date Submariners, only one variant was made available: steel with black bezels and dials. In 1998, Rolex replaced the 14060 with the 14060M, which was fitted with the chronometer-certified Caliber 3130. Therefore, the main difference between the Submariner 14060 and 14060M is that the former is not a chronometer while the latter is.

The next generation of Rolex Submariners started rolling out in 2008. This marked a significant moment in the history of the Submariner as Rolex added plenty of new updates to the watches. First, there were the Cerachrom bezels, which are fashioned from Rolex’s proprietary ceramic alloy that promises not to fade or scratch. Then there are the redesigned “Super cases,” which are still 40mm, but wear larger thanks to fatter lugs, thicker profiles, and wider bezels.

Rolex did not launch all the ceramic Subs in one go, but added new variants over the course of a few years: 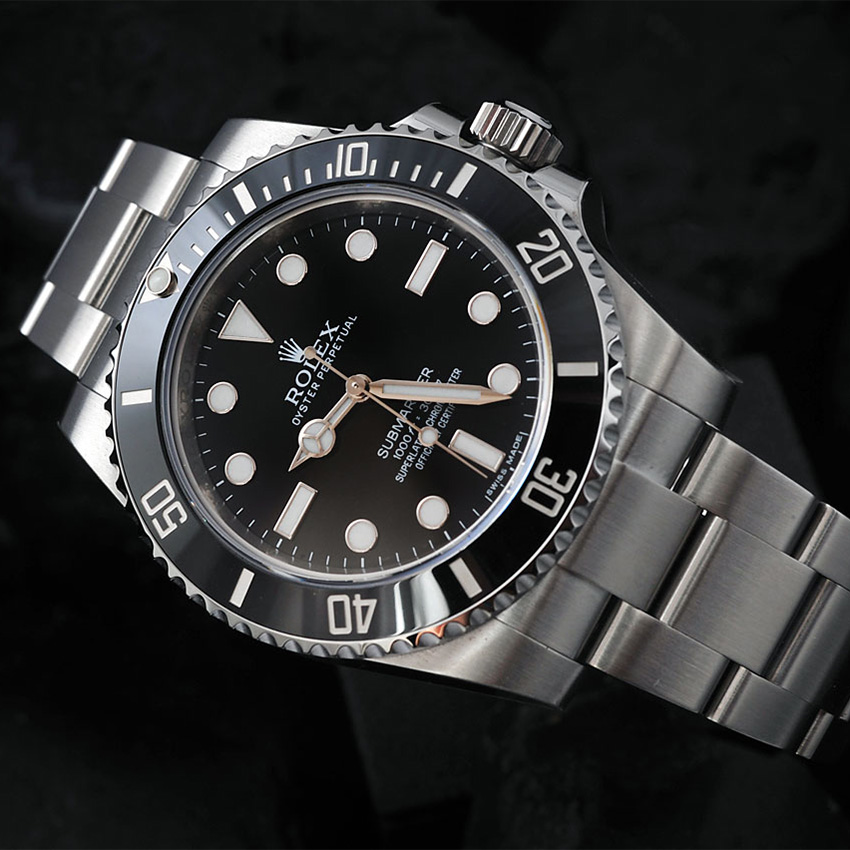 Other notable changes that Rolex included with these Cerachrom Submariners included Chromalight luminescence on the dial (glows blue) and updated Oyster bracelets with new clasps and diver extension systems.

In 2020, Rolex revamped the Submariner line yet again with a handful of significant improvements. The biggest change was the size increase to 41mm. All current production Submariner watches are now 41mm and all 40mm options have been phased out. Moreover, the lug width increased to 21mm (from 20mm) to accommodate broader Oyster bracelets.

One of the most significant developments of the latest Submariners is the use of new generation movements (Calibers 3235 and 3230), which boast longer 72-hour power reserves and improved accuracy and precision.

The current 41mm Submariner collection is home to the following references: 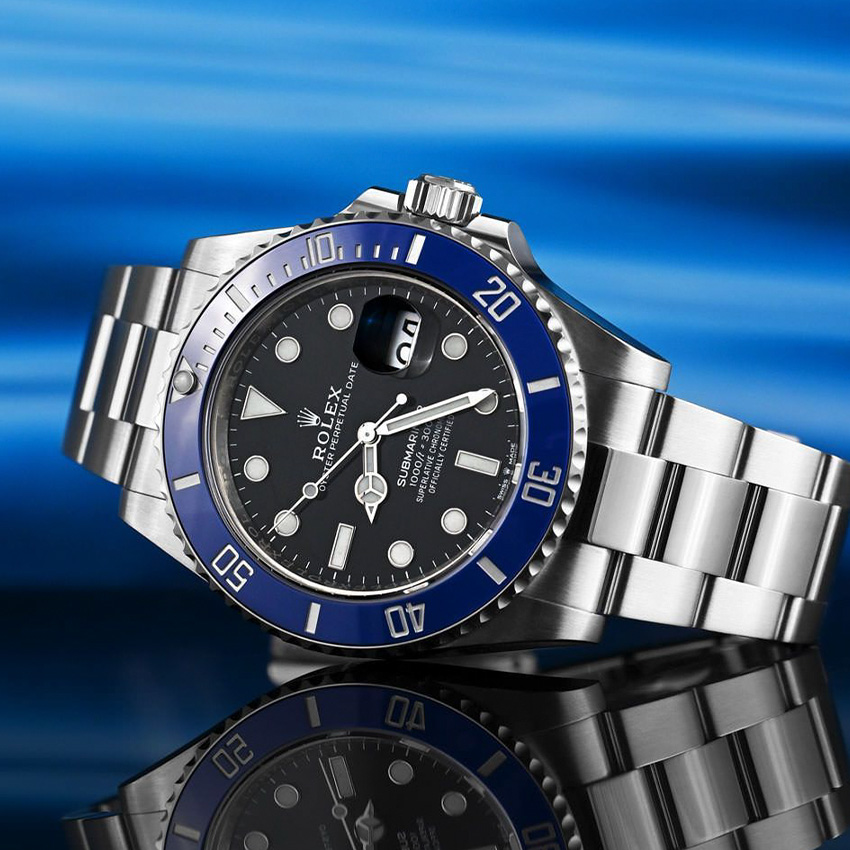 70 Years of the Rolex Submariner

2023 will mark 70 years of the Rolex Submariner and the popularity of this beloved diving watch shows no signs of slowing down. In true Rolex fashion, the Submariner has benefited from a slew of key advancements while staying true to its original design blueprint. Focusing on evolutionary changes rather than revolutionary transformations is the Rolex way, after all.

What are your thoughts on the Rolex Submariner? Are you a fan of them? Do you own one or hope to own one in the near future? If so, what’s your favorite Submariner reference? Drop us a comment below!