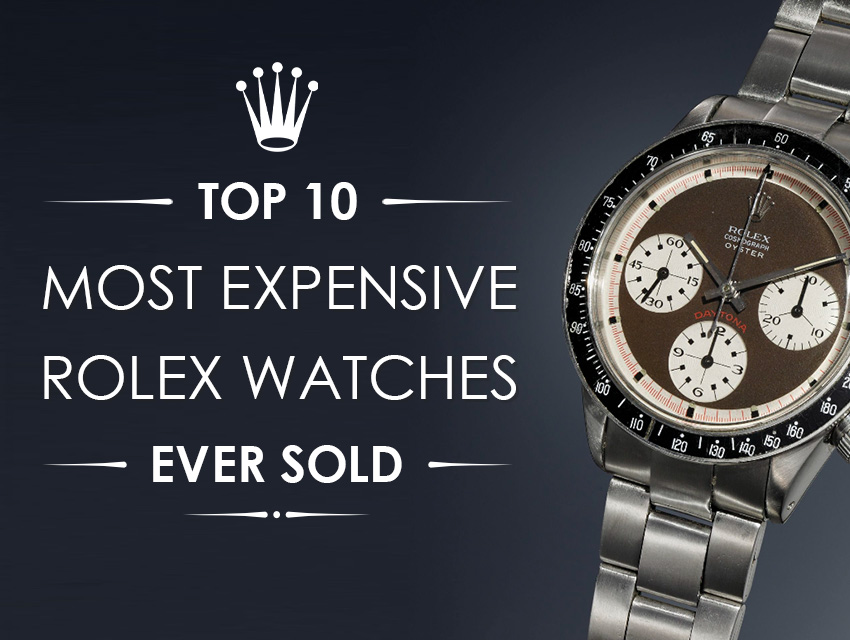 Aside from impeccable designs, dependable movements, and global brand recognition, another reason that Rolex is the leading luxury brand in the world is the potential for its watches to resell at a higher price in the future. While not all Rolex watches appreciate, many of them do. And though it is not exceedingly common for a vintage Rolex to sell for millions of dollars, some have. Here are 10 of the most expensive Rolex watches ever sold at auction.

Sold by Phillips at The Geneva Watch Auction: FIVE, May 2017 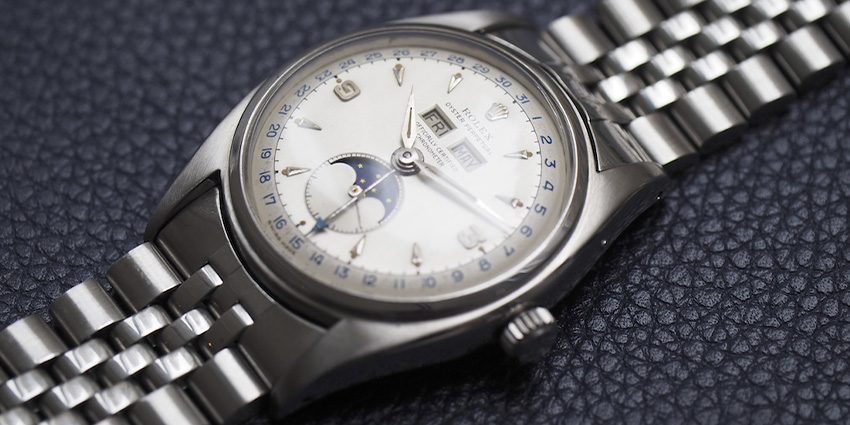 At tenth place on the most expensive Rolex watches ever sold list is a vintage Rolex Triple Calendar Ref. 6062, made in 1953 and crafted in stainless steel. A steel example of the reference 6062 is exceptionally rare as they were more commonly made in yellow, white, or pink gold. Furthermore, Rolex has only ever made three models with a moon phase display: the ref. 6062 as seen here, the vintage reference 8171, and the contemporary Cellini Moonphase ref. 50535 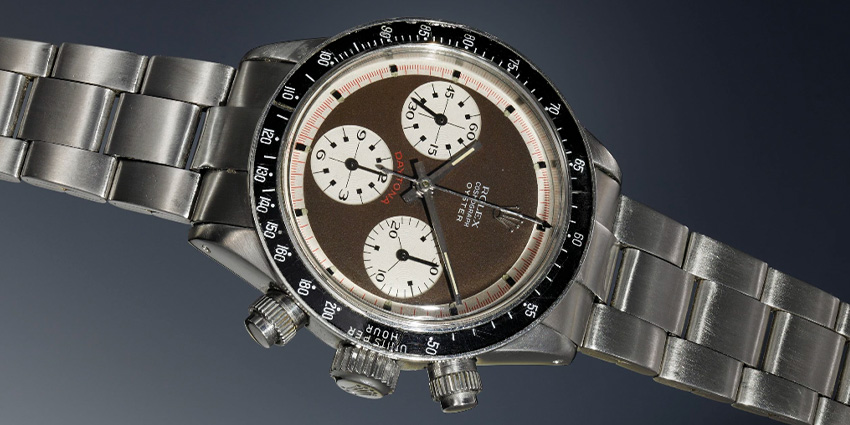 You’ll notice plenty of Daytona chronographs on this list of the most expensive Rolex watches since these are, by far, the brand’s most collectible vintage references. Coming in ninth is an example of a steel vintage Rolex Daytona ref. 6263 with a few coveted design traits. First, there’s the exotic dial, better known as the “Paul Newman” dial (more on that later), then there’s the irregular placement of the “Oyster” name under “Cosmograph” and finally, the patina of the dial resulted in the once-black dial to morph into a rich brown shade. 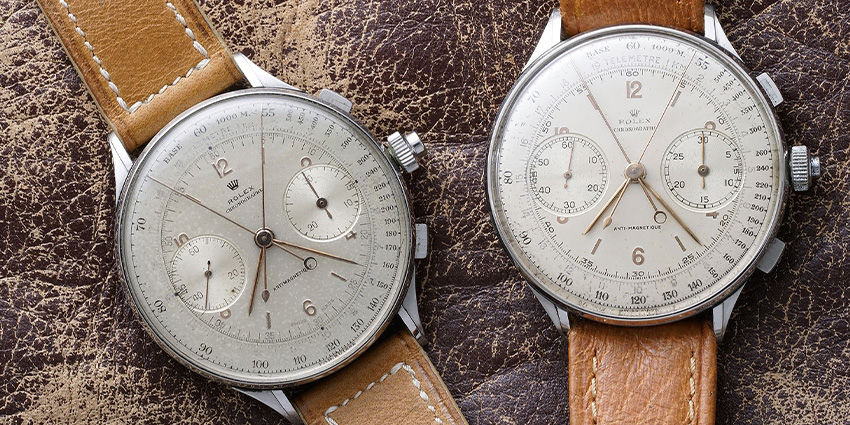 Not only is it estimated that a mere 12 examples of the vintage Rolex Split Seconds Chronograph Ref. 4113 were ever made but they were also never for sale. Instead, these vintage split-seconds chronographs were given to select racecar drivers and teams as part of Rolex’s motorsport sponsorship activities. This rarity and curious provenance help to explain why when this reference 4113 was sold in 2016, it was at the time the most expensive Rolex ever sold at auction.

Sold by Phillips at Daytona Ultimatum Geneva Auction, May 2018 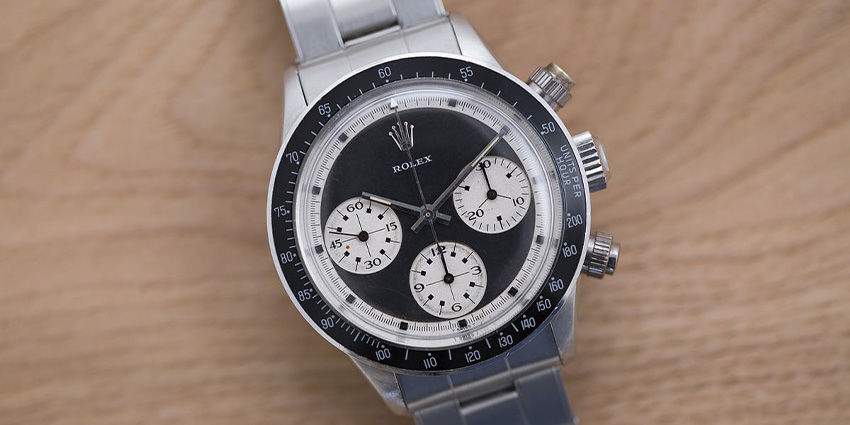 Nicknamed “The Neanderthal” for being the ancestor to the “Paul Newman” dial style, this steel Rolex Daytona ref. 6240 from 1966 is a one-of-a-kind Rolex. It is the only known Daytona to have this particular dial design, characterized by a unique (to the Daytona) color combination, oversized subsidiary dials, and the absence of the “Daytona” or “Oyster” names.

Sold by Sotheby’s at the Important Watches auction, July 2020 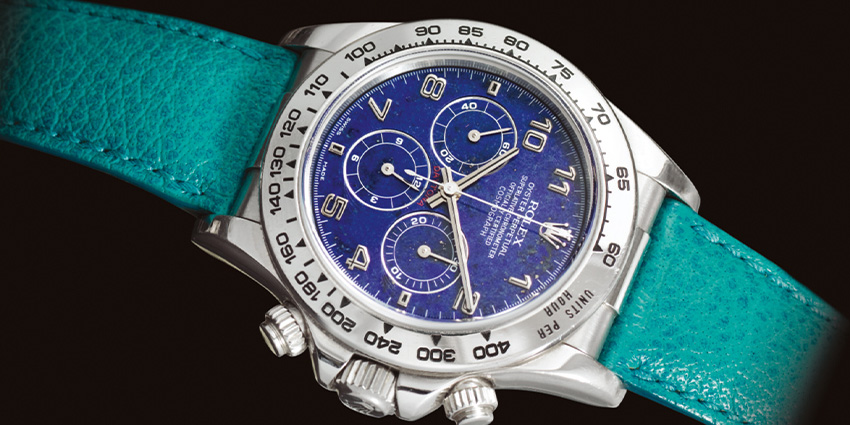 This “possibly unique” platinum Daytona ref. 16516 is a relatively new member of the priciest Rolex watches club, joining in the summer of 2020. It sports a platinum case (thought to belong to a very limited batch of platinum Daytona chronographs Rolex manufactured in 1999), houses an intriguing lapis lazuli dial, and runs on the Zenith El Primero-based automatic movement. 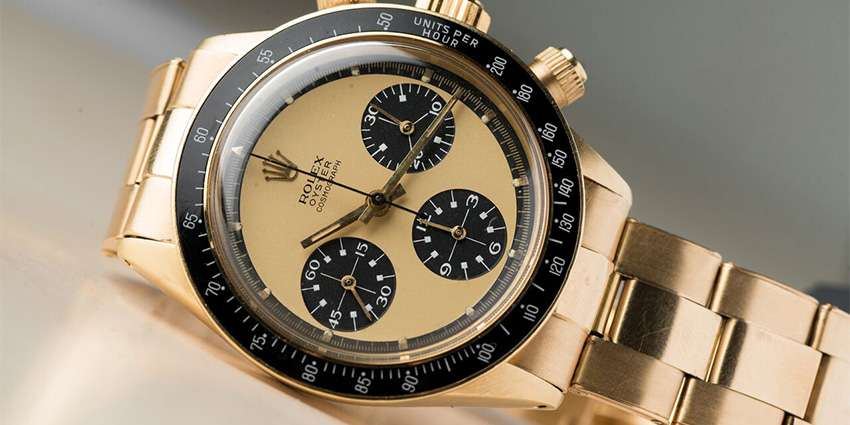 Yet another record-breaking Rolex, this reference 6263—known as “The Legend”—became the most expensive Daytona sold at auction in 2017. It is one of only three known examples of a yellow gold Daytona with both an Oyster case and a “Paul Newman” dial. Plus, its striking creamy lemon-colored dial no doubt helped to fetch such an impressive price.

Sold by Phillips at The Geneva Watch Auction: FIVE, May 2017 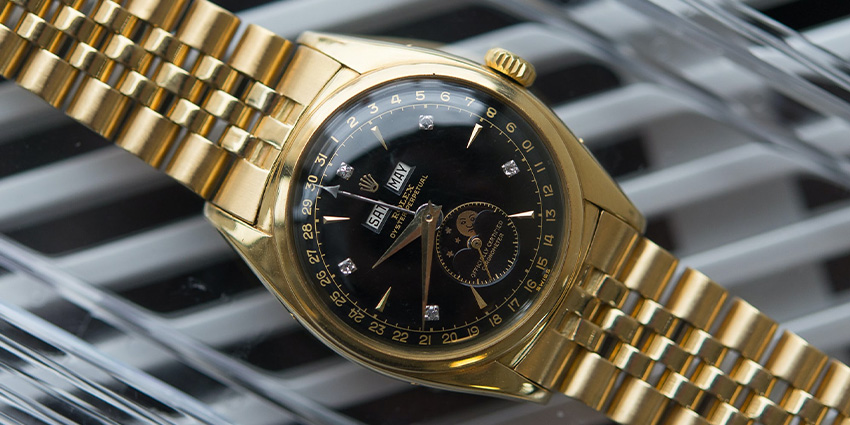 Bao Dai was the last Emperor of Vietnam and the original owner of this extraordinary yellow gold Rolex Triple Calendar ref. 6062, furnished with a black dial set with five diamond hour markers. When it sold in 2017, it became the most expensive Rolex ever sold at auction. However, this was not the first time the watch earned that title—it first set the record back in 2002 when it was auctioned for “only” $235,000. Now that’s an incredible return on investment! 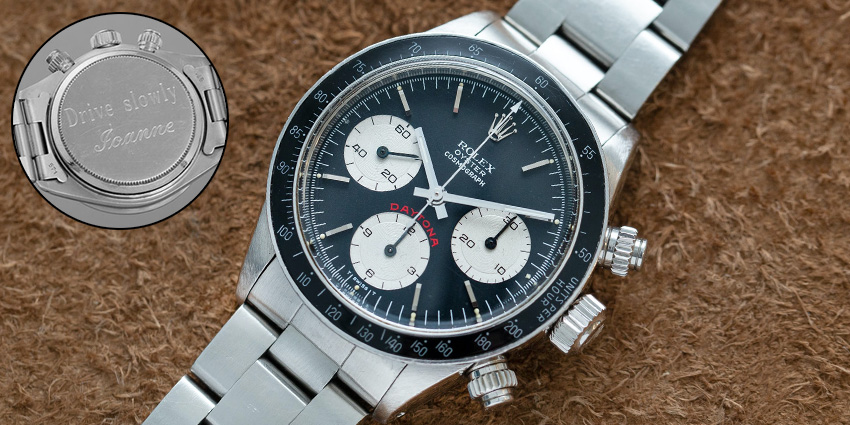 The newest entry to the top ten costliest Rolex watches, this steel Rolex Daytona ref. 6263, which once belonged to renowned actor and race car driver Paul Newman, sold in December 2020. This particular dial configuration is nicknamed the “Big Red” thanks to the oversized crimson-colored “Daytona” name on the dial. It’s reported that Paul Newman’s wife, Joanne, gave him the watch in 1983, complete with the engraving “Drive Slowly // Joanne” on the caseback.

Sold by Phillips at Daytona Ultimatum Geneva Auction, May 2018 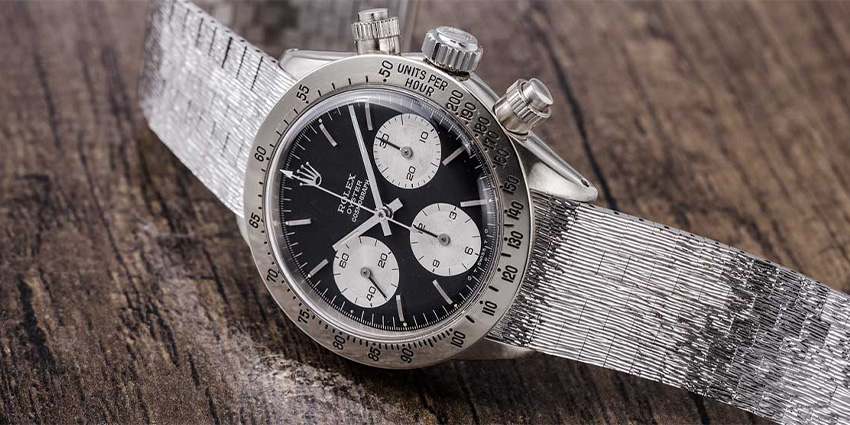 Put up for sale by John Goldberger (one of the most important Rolex collectors of our time) to benefit the Children Action foundation, this 1970’s Rolex Daytona Ref. 6265 “Unicorn” is the only known example of a manual-winding Daytona to have a white gold case. When Goldberger owned the watch (he purchased it in 2000) he had a white gold bracelet with a bark finish made especially for this one-off Rolex. 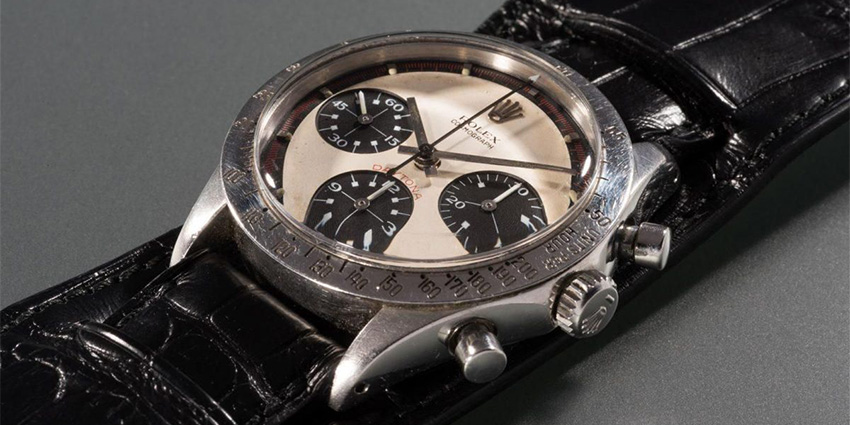 And here we are, the titleholder of the most expensive Rolex ever sold – Paul Newman’s “Paul Newman.” Why this steel Rolex chronograph fetched almost $18 million is difficult to explain to those outside the watch world. However, to those inside the watch community, its importance is momentous.

When Rolex manufactured the now-vintage manual-winding Daytona chronographs from the early-1960s to the late-1980s, it offered the option of “exotic dials,” which were different from standard Daytona dials. It’s been reported that sometime in the 1980s, clever auctioneers began selling these exotic dial variants as Daytona “Paul Newman” watches after discovering that the famous actor wore one. The name not only stuck but it eventually carved out the most exclusive segment of the vintage Rolex market.

Today, vintage Daytona watches are the most sought-after Rolexes in the collector’s market and the “Paul Newman” editions are the most coveted of them all. And this is the watch that started it all.

There you have it, the ten most expensive Rolex watches ever sold. Which Rolex is your favorite on the list? Share your pick with us in the comments section below.